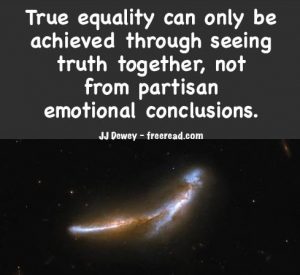 Most realize that it has nothing to do with skin color but the major difference in the two countries lies in the huge gap in their situation as far as a freedom, security and economics goes.

Canadians seem to feel as equally secure in these three areas as those living in the United States. Thus we do not have a big rush for them to come here. Instead, we have some Canadians moving here and some Americans moving there of their own free will. It is a fairly even exchange.

On the other hand, Mexico and Central America have tremendous problems with freedom, security and economics. This creates great impetus for the people to move to the United States any way they can get here.

We can’t place the major part of the blame on the common people south of us for the problem. If you or I were in the same situation we would also attempt to do whatever is necessary to provide for and protect our families. As usual, the major blame goes on the ruling classes, the powers-that-be in the government and the various power brokers in and out of the country.

The question is, what are we going to do to help Mexico become more like Canada and the U.S.A.?

Unfortunately, allowing a flood of illegals as well as lack of screening for drugs, criminals and possible terrorists would lead to us becoming more like Mexico rather than Mexico becoming like the U.S.

No matter what view one has on undocumented people and no matter how liberal one is there will always be a number coming in here that would cause a person to throw up his hands and say, : “Enough!”

Right now the number of illegals is about 11 million. For many that number crosses the line. Others have not reached their limit and invite more to come.

So what would happen if the number doubled to 22 million? With the lack of housing and increase in homelessness many of the very liberal would reach their limit and say enough.

And what if we reached out to all Central America, opened he doors and the number doubled again to 44 million?

The problems would be so great that even the most liberal people would reach their limit.

We’d be like the guy who had a fine home and opened his doors to all his friends family and homeless. Pretty soon his own living conditions were so bad that he moved out into a motel.

We must always be aware of the wise virgin principle. We must maintain enough of our resources so we can complete our own journey and maintain the strength to be of assistance to others. If we become like a poor country in Central America, our immigration problem will be solved because no one will want to come here and many will want to leave. That is certainly not the goal.

There is another issue that is of greater concern than families illegally crossing the border. This goes back to 9/11 and the fear that terrorists could cross the border and wreak more havoc. The possibility of a WMD going off in a major city is nerve racking indeed.

U.S. citizens have little concern that future terrorism could come from Mexican laborers crossing the border, but an increasing number of possible Islamic extremists could be coming across. This concern creates more fallout than normal toward illegal crossing with Mexico as well as a growing concern with the borders of Canada.

The first question to settle in this dispute is this: Does the United States have the moral authority to dictate who shall be allowed across its borders and conditions for admittance?

Before answering this, another question must be asked:

Why is it that the United States is the primary country where this question is even asked?

An illegal alien entering Mexico can be fined and sentenced to up to two years in prison. When illegals are rounded up they are put in prisons that make detention in the U.S. look like paradise.

Often one will find dozens of male and female illegals together in one small room with no food, medical attention or any access to human rights privileges.

And how do they treat legal U.S. visitors who may want to stay there and work? If the U.S. citizen takes a job that could be done by a Mexican he can be sent to prison. It’s all right to retire there and spend our money, but not to make money.

That said, why then is the United States picked on, as if it were a big bully, for even considering it has the moral authority to decide who shall be allowed across its borders and conditions for admittance? It is very hypocritical for the rest of the world to point fingers of accusation at us when none of their own tolerance for illegals comes close to matching the U.S.

England, one of the more tolerant nations, has only 570,000 illegals. We have over 20 times that number.

Nations like Australia and New Zealand have the ideal situation. They are surrounded by thousands of miles of ocean which helps to minimize the problem there.

Now let is get back to our question:

“Does the United States have the moral authority to dictate who shall be allowed across its borders and conditions for admittance?”

The answer is yes, of course. If other nations have such moral authority then of course the U.S. does also. It is indeed a principle in nature that every life, whether it be a cell, an animal, human or state has the responsibility to look out for its own survival.

The obvious solution is to help Mexico and other nations become more like Canada so the residents are happy being there. That is a huge project and one we cannot tackle in this limited treatise. But, it is one on which we need to focus, for so long as the southern nations are much poorer than the United States and have restrictive governments the people will want to leave and come here any way they can.

The first step in accomplishing this is to put some attention on making this happen and come up with a feasible plan. If we do not take concrete steps the problem will continue.

1 thought on “Toward Intelligent Progress, Part 4”