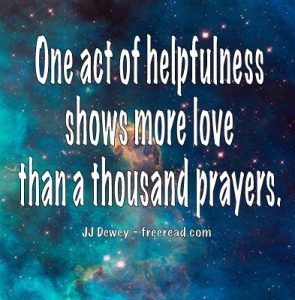 The Law of Karma

Or Cause and Effect – Part 6

Since none of us have all the answers when we all reach our individual ring-pass-not we are perplexed for a time, but then when we preserver we eventually break through and new understanding comes.

In the past I have stressed that good is that which moves us ahead in evolution and evil is that which holds us back. There is another way of looking at it as pointed out in the Aquarian Gospel.

It points out that evil is not necessarily the opposite of good, but good which is out of tune.

In other words good is playing the scale on a piano which is in tune. The sound is pleasant. But if the C note is out of tune then the sound is not pleasing. Now the C note does not have an opposite evil note, but this one note does have millions of variations which are close but out of tune, or evil.

When we are out of tune with the soul then we sound unpleasant notes and our actions are out of harmony, or what some would call evil. Even those who are out of tune are still trying to play good music, but the effort is fruitless until they attune themselves to the highest available within themselves.

Question: How does karma relate to this scripture about Cain: “And the Lord said unto him, therefore whosoever slayeth Cain, vengeance shall be taken on him SEVENFOLD. And the Lord set a mark upon Cain, lest any finding him should kill him.” Gen 4:15

Those who seek to kill those who have the mark of Cain, which was set by God, is symbolic of those who are willing to do anything including murder to thwart higher will being accomplished on the earth. Such people incur a higher weight of karma for their deed has a more lasting effect.

The New Testament gives the correct law of karma which states: “Be not deceived; God is not mocked: for whatsoever a man soweth, that shall he also reap” Gal 6:7

Keep in mind also that there are numerous ways to pay off karma. The payment is always equivalent, but not always in similar kind.

If you owe a neighbor a cup of sugar he or she may be happy with a glass of wine, the loan of a newspaper or just good conversation for the payment.

Chapter 138 of the Aquarian Gospel give some interesting teachings on karma.

1 THE Lord with Peter, James and John were in Jerusalem; it was the Sabbath day.

2 And as they walked along the way they saw a man who could not see; he had been blind from birth.

3 And Peter said, Lord, if disease and imperfections all are caused by sin, who was the sinner in this case? the parents or the man himself?

4 And Jesus said, Afflictions all are partial payments on a debt, or debts, that have been made.

5 There is a law of recompense that never fails, and it is summarised in that true rule of life:

6 Whatsoever man shall do to any other man some other man will do to him.

7 In this we find the meaning of the Jewish law, expressed concisely in the words, Tooth for a tooth; life for a life.

9 And he who shed the blood of any man will come upon the time when his blood shall be shed by man.

10 Affliction is a prison cell in which a man must stay until he pays his debts unless a master sets him free that he may have a better chance to pay his debts.

11 Affliction is a certain sign that one has debts to pay.

12 Behold this man! Once in another life he was a cruel man, and in a cruel way destroyed the eyes of one, a fellow man.

13 The parents of this man once turned their faces on a blind and helpless man, and drove him from their door.

14 Then Peter asked, Do we pay off the debts of other men when by the Word we heal them, drive the unclean spirits out, or rescue them from any form of sore distress?

15 And Jesus said, We cannot pay the debts of any man, but by the Word we may release a man from his afflictions and distress,

16 And make him free, that he may pay the debts he owes, by giving up his life in willing sacrifice for men, or other living things.

17 Behold, we may make free this man that he may better serve the race and pay his debts.

18 Then Jesus called the man and said, Would you be free? would you receive your sight?

19 The man replied, All that I have would I most freely give if I could see.

20 And Jesus took saliva and a bit of clay and make a salve, and put it on the blind man’s eyes.

21 He spoke the Word and then he said, Go to Siloam and wash, and as you wash say, Jahhevahe. This do for seven times and you shall see.

22 The man was led unto Siloam; he washed his eyes and spoke the word, and instantly his eyes were opened and he saw.