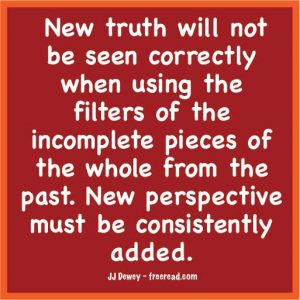 I have received some great comments on the pendulum principle and will make a few additional observations and readers can use their souls to sort out the truth.

Point of clarification. I have stated that friction slows the pendulum and is not the force that propels it.

First, I maintain that the Pendulum is an accurate correspondence to the swinging moods of humanity as it goes from error to error passing over truth. This analogy is arrived at not by taking the pendulum and comparing it to humanity, but by observing humanity and seeing therein the elements of a pendulum. When a symbol is seen in the actions of a group you have the beginning of an analogy that can reveal much truth of the situation.

So what do we see when we watch humanity?

Answer: We see that they swing back and forth in time between the liberal and conservative point of view in, not only politics, but all elements of human living. Most above average people can easily discern that both extremes are full of error and the most correct course of action lies somewhere in the middle.

Thus we see by observation that there is a literally swinging back and forth of the populace and that the most common sense approach is in the middle somewhere. This obviously corresponds to the three prime ingredients in the pendulum.

Answer: The direction is changed after the error of one extreme becomes obvious to the whole. The emphasis of the thought of the group when the error is seen is to head the other direction. Because an error was discovered on the left, the group then supposes that the truth lies in the opposite direction of the right. Instead of pausing at the point of truth, however the group heads past the truth to the other extreme.

After being wrong time and time again at both extremes the group finally sees the truth in the middle and when it does it views those of past ages as primitives, thinking that they themselves would have never been so deceived. But, the truth is that they are currently deceived through the motion of a new pendulum of which they are a part.

Question: During the swing of the pendulum why is the midway point of truth never, or rarely, exactly in the middle? Why does this create illusion? How is the illusion dispelled?

If the swing of the pendulum was stopped at the far right or the far left then the truth would be exactly in the middle of the two extremes, but the fact is that the exact point of extreme left or right is at a theoretical point; therefore, we are never exactly there. Instead, the consciousness of humanity or a group is always at some point between the two extremes.

Now people like to think in black and white terms instead of shades of gray and if you tell them the truth is in the middle they want it to be exactly in the middle, but unfortunately the following of this formula also produces error.

When the pendulum is at this point and you tell the average person that the truth is in the middle of the two extremes he will calculate the swing of the pendulum from the current point of three feet from center instead of five feet from center. He thus sees the midway point as half of eight instead of half of ten and will see the midway pointy as being a foot away from the real center,

How could it be that he who stands at the midway point can be seen, not as a moderate, but an extremist by many?

On a different note, a reader made the statement that he thought gravity was caused by electricity rather than the bending of space.

Einstein said that gravity was produced by the bending of space, but you could be right that it is related to electricity. Even though electricity is composed of negative electrons, from another angle it could be viewed as positive, or male, because it is action energy capable of initiating motion. Magnetism is the opposite polarity (female) that tends to still action and pull toward the center.

Electricity usually is transformed to action from the center outwards and magnetism pulls from the periphery to the center causing concretization into form.

Now the ancient wisdom teaches of a positive electricity that will be discovered indicating that it must be made of something other than negative electrons. Perhaps this is some type of flow of positrons, protons or even pure magnetic force. The teachings are not clear on this.

The Will of God

A reader expresses his idea that one need not experience ALL possibilities in order to awaken to a greater reality.

Good point. Many make the assumption that because a situation exists as it is, that this is the Will of God being manifest. In other words, if your neighbor shoots your dog, that it was the Will of God that the dog suffer and die at that moment in time.

This reminds me of the joke about the religious guy in the wild west who believed that all was predestined according to the Will of God and there was nothing one could do to alter it. As he was leaving on his horse through Indian territory a friend asked him:

“Why are you taking your gun with you? If everything happens according to the unalterable Will of God then the gun will not make any difference?

“Maybe so, but I might just meet a couple fellas who God wants some holes shot in them.

We cannot justify our harmful actions, our error and our laziness by merely throwing up our hands and saying: “I screwed up and drank some Drano. I guess this is part of the perfect Will of God.”

The Will of God is a concept that is very much misunderstood even by many of the teachers of the planet.

The Will of God is a force that moves toward an objective within the Purpose of God. That which falls in line with this force and moves towards the objective is cooperating in manifesting divine will. That which does not fall in line with this force opposes the Will of God. Because good is dominating and the Will of God takes us toward the good then Divine will always prevails in the end, but does nevertheless have many setbacks and detours before that end is reached.

To fall for the idea that everything that happens is part of the divine will is to fall for the illusionary mantra of the Dark Brother designed to put the Lights to sleep so the good and the talented become lazy in their efforts to progress and fail to do their part.

This is a major problem with many disciples on the earth today who were expected to work for certain preparations that have been left undone. New workers will have to be found to compensate for this delay.

Efforts that run contrary to the Will of God are of course expected and anticipated by the Brotherhood of Light, but just because we have free will to make careless decisions does not mean that all decisions are a part of the plan. If it is your will to paint a beautiful landscape and you trip and damage the painting right in the middle of your work – does this not mean that you willed the accident? No. Of course not. It was not any part of your plan that such an accident occur, but what was the plan (or your will) is that the painting be completed and you proceed in that direction and repair the painting and finish it.

When the painting is done your will is completed despite the accident which was contrary to your will.

When the Will of God is accomplished, it is completed in spite of setbacks, not because the setbacks were a part of the plan.