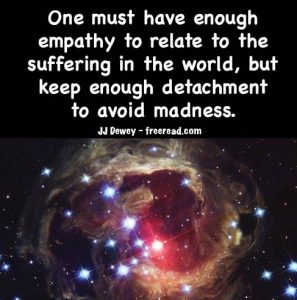 I have to take issue with a reader on the football game thing. To say that a highly evolved person will not take sides in a game because it does not matter who wins I believe to be an illusionary statement.

I don’t think one can get much of enjoyment out of a game unless you do have a favorite. If you just watch the game for the game’s sake and to appreciate the skill of the players then you might as well watch last year’s Superbowl rather than the current one.

If I turn on a game and don’t have a clue as to the background or history of the team I just don’t have enough interest to watch. Sure it’s mildly interesting to watch a great play of some unknown team, but I would rather watch a bad performance of a team I know and like.

So where does this idea come from that if we are advanced on the Path that we will just cease to feel and not give a hoot about who wins what?

The problem is that many great teachers in the East have put emphasis on the overriding, control, directing and sometimes neutralization or elimination of emotion in order to reach higher states of consciousness. Many students have interpreted this to mean that we should “kill out desire” completely, move beyond it and never experience it again.

This is an extremist point of view and as Buddha taught neither extreme is the path to liberation.

What then have the teachers really meant when they taught thus about desire and feeling?

Perhaps the best summation of this is the admonition of Jesus to “live in the world, but not be of the world.”

The high initiate is expected to not be of the world to the extent that he is able to have power to neutralize or at least direct his feelings and change directions at the drop of a hat if the Purpose of God so requires it. It takes many lifetimes before this point is reached.

On the other hand, when desire is not out of alignment with purpose it is good judgment to be “of the world,” and let your emotions play themselves out intelligently. When the disciple is appropriately “of the world,” he will love and feel passion with the best of them. If there is a contest he will be happy to cheer for a certain side. Why deny yourself of such a pleasure when there is no purpose in it?

When a question of the right or wrongness of a philosophy comes up, in addition to looking within to the soul, I also look at the great initiates of history and see if their actions confirm what I have received. Time and time again it does and this is no exception.

Two of the greatest initiates in the United States were George Washington and Abraham Lincoln. Both were leaders in the most stressful game of all called war and both of them took definite sides and were extremely concerned about the outcome. One thing that really concerned Lincoln is that he often was much more concerned than his generals seemed to be. All McClellan seemed to want to do is show off rather than win and this attitude about drove Lincoln around the bend.

In more recent times Winston Churchill replaced Chamberlain who had a cavalier attitude toward Hitler that lead the World into war. Churchill took a definite side and had an extreme interest in the outcome.

DK in writing through Alice A. Bailey said that the Christ himself took the side of the Allies during the war and worked behind the scenes to assure victory.

Some have expressed irritation that I have defined the word channeling for this class. They seem to think I have arrogantly redefined a dictionary definition for the entire world.

As far as the dictionaries go they do not give a very specific definition for channeling and many differing groups use the word with different meanings. Because of this I defined the word FOR THE CLASS, not for the world.

Let me repeat myself here. When sending or receiving it is important that we apply similar meanings to the same word. If I say the word “channel” and I am referring to an astral entity possessing the body of a medium and you think I am referring to mental telepathy because you define it different then confusion is the result.

In a class the definition of a word is what the group agrees upon, I’m sure there are other classes on the web where the word channeling is used to include mental telepathy. Does this bother me?

The teacher of any class has the right to define his terms in what he sees the best interest of learning. If anyone disagrees with this I would like to know the reason why?

If I want to call an orange an apple to make a point while teaching then why complain about it?

I received a message from a member of the group explaining to me his great mission as a messiah type of avatar.

Since I have been teaching I have been approached by many “great ones” such as by the supposed reincarnated souls of Michael the Archangel, Paul of Tarsus, John the Baptist, and several Joseph Smiths and Ones Mighty and Strongs wanting me to either follow them or work with them in promoting their mission. I felt no spiritual or familiar vibration among any of them and they were quite disappointed that I had no desire to work with them. One Joseph Smith guy was particularly upset.

I think just about every break off from the Mormon church is lead by one who claims to be one Mighty and Strong.

Let me place this one question before you to consider:

Is it possible that your thoughts of a great mission and the idea of being the One Mighty and Strong the greatest obstacle in your path to true greatness and glory?

I believe you do have a great mission, if you choose to accept it, but the nature of it is different than you have envisioned.

I beseech you to join with me and teach the highest that you know, planting seeds that will grow into the baptism of fire making no claims for yourself and not giving a care in the world as to whether anyone recognizes your stature. Even if a great mission is revealed to a disciple he should go forward making no claims of greatness. If God wishes to glorify a servant like you or I then glorify he will beyond anything we can do on our own.

Let us go forward with purpose with minds and hearts focused within the fiery will of God. Let our happiness and joy be in seeing the work being moved forward even if we should die unknown and unrecognized.