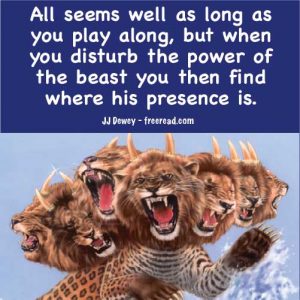 Some time ago I decided to cover the Beast as one of my first topics in teaching for several reasons. First, the influences of the Beast are everywhere including this group to a degree so in introducing the principle early I hoped to bring up periodical examples of the Beast in action for the purpose of shedding more light on the subject from time to time.

This is essential as the Beast is very difficult to detect when it influences our own lives.

Secondly, I was aware that I would periodically be accused of either being the Beast or working for him so I hoped the teaching on the subject, which is in harmony with not only the Bible, but common sense, would dispel accusations made in a state of blindness.

It is indeed true that the Beast uses unearned authority. Jesus described this use of authority in his day as “the blind following the blind.”

It is easy for us to look on the past with hindsight and think to ourselves: “If I had lived in the days of Jesus I would have seen through those stupid authorities. I would have recognized the truth in the words he spoke.”

But would you? Would you have been able to escape the Beast in that day? Have you escaped him today? We must all ask ourselves this regularly if we are to remain free in the kingdom of the soul.

Think on this. At the time of the resurrection, Jesus had only 120 who accepted his teachings. That’s 120 out of all the world in that day.

Now we can look back with smugness and clearly see from our vantage point that the authorities in Jerusalem were deluded, but what many of us do not realize is how much different it was to have actually been back there under the thoughtform of the authorities and how difficult it was to see through it at that time.

Even so, in our day, there are many thoughtforms projected by the Beast that the majority buy into. One thousand years from now people will look back on us in smugness and wonder how we could have been so duped. They’ll figure we really must have been primitive in consciousness. Yet they too will not understand what it is like to be here in the current time and have to deal with the illusions which compete for control over our souls.

Several versions of the conception of Jesus have been discussed. Do you accept one of them as a certainty? If so, why do you? If you accept merely because a prophet, priest, teacher or even the Bible says so then you are not free from the Beast.

If you do not know for sure and refuse to accept the word of an authority just because the authority says a thing is true and admit that you are open to all possibilities then you may be free from the Beast – IN THIS AREA.

You are also free from the Beast when you find the real truth whatever that is. How do we do that?

So when you go within and seek the truth will you be free from the Beast?

Answer: It depends on what part of the “within” you go to. Over 90% of those who go within for truth get their verification filtered through the astral world and the astral world is manipulated by the authorities WITHOUT. Thus, there are many people claiming to teach knowledge from within which is really illusion reflected from without.

This is why the principle of soul contact is so important. Only when soul contact has actually been made will one be able to discern the difference between the astral within and the soul within. Then too, even those who have made contact can slip backwards from time to time, thus the importance of eternal introspection.

One key for understanding soul contact is this. When soul contact is reached and held in consciousness the seeker will then be able to recognize others who have obtained it. They will feel their vibration in any communion and sense a oneness.

Ironically, those who are under the influence of a similar thoughtform of the Beast will also sense a oneness and a kindred spirit, but it will be a oneness in direction. Those who have soul contact will experience a deeper oneness that goes in all directions. This must be experienced to be able to understand and differentiate.

Keep seeking until you find.

The Beast is still alive and well in our day and indeed it represents an energy of authority which attempts to keep humanity from progressing to the plane of the mind which rules Aquarius – being an air sign.

This energy filters through all religions, political parties and philosophies. The key to recognizing the Beast in action will be this: You are expected to believe a thing merely because it is proclaimed and the proclamation so made is lacking some facts, twisting others and appeals to an emotional sense of what is right.

Finding real life examples of the Beast in action is easy as they are everywhere. Just read your daily newspaper. You will see proclamations from politicians, Government organizations, scientists, educators, religious leaders and others. Many people accept these without questions even though they are completely oblivious to the facts surrounding the stories. The average guy just thinks that the authorities have thoroughly investigated the subject and must be correct.

Often just a little research will reveal flaws in the information, but many are just too lazy to even seek to discern the truth.

The true seeker is not lazy but always aware and sincerely wants to know the truth of all things.

2 thoughts on “Finding the Beast”