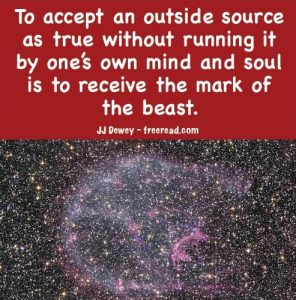 There seems to be a major misunderstanding as to what the Beast is that I would like to comment on.

It seems that we are taking actions of others that we personally do not like and calling them the work of the Beast. In other words, many are seeing the Beast as a misuse of power.

Which side is the Beast on?

Answer: Neither has anything to do with the Beast. 99.9% of all people, groups and business will act in their self interest and in doing so those who do not have their interests served by the self interest of others will feel a loss and sometimes ill will.

When entities are given the freedom to act in their self interest will they always act for the good of the whole?

Answer: No. Their decisions will almost always be in their own interest and this will sometimes be contrary to the good of the whole, but on the positive side, that which is good for the individual entity is often good for the whole and thus by allowing the freedom to be selfish we also allow the whole to be healthy for a dominating good is at play.

What happens when we see the Beast as being a selfish power we do not like and try to correct this by force?

Example: The old Soviet empire is a good example. There every attempt was made to eliminate selfishness and the people were miserable, because they were looking in the wrong direction for the Beast.

Example of people free to be selfish, free to be wrong and free to misuse power: The early United States where was experienced the greatest rise to power and prosperity in the history of the world.

If some person, company or government is not the Beast, then what or where is the Beast?

Give an example of the true Beast in action.

The fact that Bill Gates may act to put the little guy out of business may not be the Beast, but there are actions that Bill could take (and does) in this direction that makes him (and employees) agents of the Beast. Give a possible example.

A reader figures that the mindless following after DOS because IBM was behind it is an example of Beastly following.

However, IBM is somewhat of an earned authority in its field, but because the people followed without checking up on their earned authority – especially as it was leading the to a new field of endeavor this can illustrate a mindless acceptance that is a tool of the Beast.

A point I can not stress too much is that the Beast is not the Beast because he is evil in the traditional sense, but because of mindlessness. A good thing can be your Beast including the Bible, Jesus, your nation – anything outside yourself that you follow mindlessly.

If you are feeding the homeless because you are simply ordered to by your Beastly leader then you have the mark of the Beast.

Why is this bad?

The Dark Brothers always start with goodly sounding control by dangling a carrot of good works in front of us and then move us over into acts we would never do “if we were thinking.”

This is what Hitler did with good and decent people in Germany. Time and time again at the war trials, those who did despicable acts merely stated in their defense: “I was just following orders.”

So what could Bill Gates and his employees do that would be a Beastly act? No one gave a good example of this so let us give a possible scenario.

Bill Gates: “This new upstart of a company is giving us trouble so we need to crush them. Jim. Dig up some dirt on them and feed it to the press.”

Jim: Jim does not think of any right or wrong here. He merely answers “Yes Sir!” and obeys.

Bill Gates: “Bob! Find some legal technicalities they have and file some lawsuits.”

Bob: Now Bob had a company once that was driven out of business by lawsuits so he was reluctant to conform, but after a pause where he thought about the needs of his family for the weekly paycheck he sighed and put on a smiley face and said: “I’ll get right on it.”

Bill Gates: Gale! Write a virus and find a way to get it into their software.

Gale: “Couldn’t we get in trouble if we get caught.?”

Bill Gates: “Believe me. We will not get caught.”

Gale: “I don’t know about this. I try and live a good Christian life and this doesn’t seen to be the right thing to do.”

Gale: She too thinks about her family. “I suppose I am on the team.”

Bill Gates: Is it yes or no?” Bill demands.

Bill Gates: Ok then. Sally. My sources reveal that the President of the company is having an affair. Do what you have to do to get pictures, tapes, whatever you need to let leverage on the guy.

Sally who desperately needs the job says: “I have to draw the line here my friends. What is it with you people? You are following along like mindless idiots. Now if we want to start this meeting over and proceed with a fair course that is fine, but I am not going along with this plan.

Bill Gates: If you do not go along you are out of here and I’ll see to it that you never work again in this industry. You’ll be lucky to get a job as a waitress.

This is of course an imaginary example and we have no way of knowing what Bill Gates does in his private meetings but the question is:

Can the power of the Beast descend even lower than a large company? Can it exist in a small company of three employees? In a family? In a ball team? With your drinking buddies?

Can you see how the prophecy is fulfilled which says:

“And all that dwell upon the earth shall worship (kiss up to) him, whose names are not written in the book of life…: Rev 13:8

Yes my friends, we do not have to wait for a computer chip to be placed in our hands to receive the mark. The mark has been here for thousands of years.