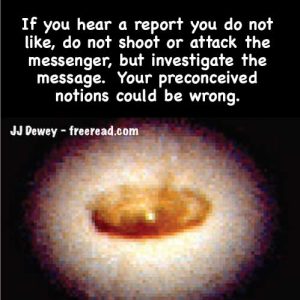 I would like to make a few comments on the Pharaoh Principle. The parable as a whole gives the overview necessary to paint a picture of the principle. Now let me sum it up in two paragraphs;

“This applies whether the authority is a golden calf, a spirit, a man or a god and it matters not whether he is good or evil.”

If we go back and examine the pharaohs, kings, emperors and dictators past and present the actions of their subjects are almost universal.

When faced with confessing that the authority is right or wrong he will say he is right.

When faced with confessing whether the authority is powerful or weak he will say he is powerful.

When faced with confessing whether the authority is right in proclaiming lie or face his wrath, he will say he is right.

When the authority asks or demands something unreasonable the subject will give it, often to yielding even his wealth, his spouse and children.

If the authority claims to be greater than he is, even to the point of being a god over others, the subject will encourage him.

If the subject has to voice his opinion either in the direction of increasing the image or power of the authority or decreasing, he will always pamper the ego and increase the image.

Why do subjects follow this line of least resistance and add fuel to this absolute authority of their potentate?

Answer. It is always initiated because of fear, but when the habit becomes established the practice becomes embraced to the point that the subject will often begin believing his own words and see his authority as perfect, always correct and always to be adored.

Now if people are such sheep with earthly authorities that have power over their career, or even life, would they not even be more cautious to not offend a being who can destroy their very soul?

Many a brave man who has faced, without flinching, enemies strong and animals fierce have been stopped in their tracks by fear of the thought of an avenging or of an offended God which has been conjured up by those seeking to control him.

Thus all the gods, sons of god, and projections of God as well as many representatives of God are supreme examples of the Pharaoh Principle.

If the believer is faced with proclaiming God to be all powerful or just powerful he will not consider offending God and proclaim him all powerful even though he has no direct knowledge of the extent of God’s power.

If the word of God seems to say something totally ridiculous to the reasoning mind, then the believer will throw the mind out the window and accept a fairy tail if necessary just to make sure god is not offended. Examples are the belief that God created the universe in six 24 hour days and the universe is less than 10,000 years old.

If a prophet, priest or scripture, speaking for God, seems to teach a doctrine, the subject will not even analyze the teaching or run it past his reasoning mind. Because such reasoning may mean doubt, he accepts without question just to play it safe. Playing it safe with God becomes so automatic that he is not aware when he reaches the stage that he has forfeited free will and becomes a slave to illusion.

Unfortunately, this Pharaoh Principle applies to the traditional believers in Jesus just as much as it does the believers of Allah, Krishna or the god in a nearby volcano.

If it comes down to a choice in believing that Jesus created the earth or not why yes, let’s give him credit for creating the earth since to express otherwise may offend him.

Again, if it comes down to a choice in believing that Jesus created the whole universe or not, yes again, lets give him credit for creating all there is.

If it comes down to the choice of giving him the stature of being “the” Christ, “the” God or “the” Savior rather than a Christ, a God or a Savior the unthinking believer will go for the “the” every time just to make sure Jesus knows he is on his side.

Now giving praise to Jesus is good and fine if it is well thought out and given because of truth perceived, but just put yourself in the place of God for a moment.

Would it mean anything to you to be praised by multitudes who are only doing it as insurance against hell – or fire insurance as some call it?

Would it mean anything for them to proclaim great attributes to you when they really have no idea how these attributes even apply to you?

If you were a god of truth then wouldn’t the truth be the important thing? Is there any true glory outside of that which is true?

The answer is of course, no.

A reader accuses me of craftily attempting to dethrone Jesus.

While it may be true that Jesus was without blemish as far as the spirit of the law is concerned – one must apply the Pharaoh Principle to believe that he literally obeyed every single rule in his life, especially when it is not even supported by scripture.

Seeking for truth, finding truth and teaching truth only enthrones with true glory. Any throne created outside of reality is made of shadows and cannot give support to the power of God.

As far as being crafty goes – this statement implies that you think I am consciously manipulating data to deceive and I assure you this is not the case.

I make no claims of perfection and if perchance I am wrong in any of my teachings it is error on the path of a sincere attempt to deliver the truth. I seek to not be controlled by The Pharaoh Principle but to follow the path least traveled by wherein the full truth is the end result. I bid you to join me.

1 thought on “Explaining The Pharaoh Principle”