It is interesting that we have not heard Braco speak a word yet he has caused a great plethora of words to burst forth here on the Keys.

In reading comments on Braco sites I have noticed two typos misspelling his name – both seem to be done by accident. They were “Draco” and “Bravo.”

Draco the dragon could be associated with the dark side and “Bravo,” representing courage, could be the light. So even with subconscious Freudian slips we have the contrasting light and dark surfacing on the guy.’

A number of you are wishing I would give more specific comments on Braco and some were a little frustrated when I said I hadn’t received anything on him. This is not unusual. There are billions of people that I do not receive anything on and neither do I particularly care to.

However, Braco has aroused our curiosity so I decided to have a talk with my soul. I said, “What gives? You haven’t given me anything on Braco yet?”

The soul responds, “Do your homework and find out a few things for yourself.”

A few days pass and I say, “I’ve done my homework and still the guy is like a non entity. Surely there’s some morsel you can give me?”

The soul gave me a look. It was a Braco type of look that irritated me. I grabbed my soul and threw it against the wall and was close to slapping it around. Then I said, “Look, I’m tired of playing games. Give me something to go on here!”

My soul brushed itself off looking a little impatient with me, “Okay, okay, just relax. If you insist I will give you something. I’ll give you two words and from that you should be able to use your intuition and put everything together.”

Here it is… Now listen carefully and reflect. The Soul spoke:

“Blue dot?” I questioned. What kind of hint is that?

“Exactly what you need.” The soul grinned with a hint of superiority and was gone.”

Okay, that wasn’t exactly how it happened and I used a little creative license but that gives you the idea that I do not use the orthodox approach to meditation. But it works. I did finally get a hint from my soul – The Blue Dot.

What is the blue dot?

Here’s the story. Back in June 1990 The National Enquirer published an article about a psychic named Judy Hevenly who claimed to be able to energize a blue dot. All someone had to do was to look at the blue dot that had been personally energized by her and make a wish. Her energy would then go through the blue dot and activate the person’s desires. If the individual concentrated enough on this dot (see below) then their dreams of money, health marriage etc would come true. 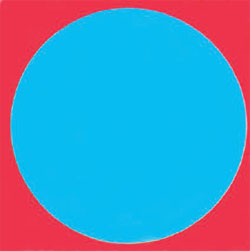 They published the blue dot with the story and invited readers to make a wish and stare at it and then write in and tell them what happened.

I remember reading this article and then wondering what kind of results they would receive. After a couple weeks the response was published and the National Enquirer editors were quite pleased. Thousands of letters poured in claiming all kinds of miraculous results. Some gained wealth, others love and still others had miraculous healings. Since being published lottery winners claiming the blue dot gave them luck have won over $170 million.

Many thousands believed in the magic of the blue dot and that psychic Judy Hevenly had truly energized it. Many people cut out the blue dot and put it in their purse or wallet and looked at it several times a day.

The response was so positive that Judy could have probably started a church based on the dot except the idea of “Church of the Blue Dot” might be hard to sell as a serious religion. Anyway the Enquirer found the blue dot to be so successful that they have republished it a number of times and even given free blue dots to new subscribers.

Now let us step back, look at this logically and ask a few questions.

Was Judy Hevenly some special being who was so full of psychic power that she could energize millions of blue dots in all the issues of the National Enquirer?

Was the blue dot published in the Enquirer energized any more than a blue dot I could print up on my HP printer?

Yet miracles happened. If the cause was not Judy’s energy or something magical in the dot then what did cause them?

Well, it may have not been Judy’s energy that did the trick but Judy was responsible. Even though she did not have any inner power that was special she did act as a director of energy and directed the scattered thoughts of the many into one location. Since energy follows thought then a lot of energy was stirred up by millions of readers and for some, who were good receivers, miracles did come.

I think the reader can see the connection here with Braco. Braco is the blue dot. The people who sponsor, introduce and support him play the director’s role, as did Judy Hevenly.

There are two reasons why even sensitive people have difficulty picking up anything either positive or negative on Braco.

The first is obvious. He says nothing and this makes it difficult to make any composite judgment on the guy.

The second is not so obvious and it is this. Braco sees himself as a channel of divine energy and just as he feels his words get in the way even so does he feel his thoughts get in the way. Thus when he goes on stage he stares at nothingness. Rarely does he look at any individual unless one happens to draw his attention for some inner or outer reason. Often he does not see the crowd itself but places himself in as complete neutral state as possible. Just like the blue dot, then he becomes a point of focus and the energy created comes from the powers of the inner God in the audience themselves with of course Braco’s added in.

Wherever Jesus healed anyone he never said “I have healed you,” but “YOUR FAITH has made you whole.” Jesus was merely a director of energy to open the door to the souls of the people who were healed so their own powers of godliness could heal them.

Is Braco a Master? I don’t think so. A Master has to demonstrate mastery of “the Word” by showing forth wisdom. Thus they are called Masters of wisdom.

Some think he is a master because of the positive feeling they have during sessions and are drawn back again and again to get an extra dose.

These people are looking for happiness on the outside and will have to keep returning until they find it on the inside. When it is found on the inside then it will just be there all the time and they will not have to depend on any one person to possess it.

Would I be any happier if Jesus moved in with me for a month – would just having him physically present make a difference in my well being?

Not really. In fact I may find that he gets in my way.

On the other hand, if he went beyond just gracing me with his presence and teaching me something would that help?

Yes, it would. This would increase my happiness.

If he went a step further and came up with a project that we could work on together to fulfill divine purpose would that increase my joy?

Yes, that would be a fun thing to do with such a master.

But as far as just having his presence… well I already have that through the Oneness Principle so having his physical body nearby wouldn’t bring that much enhancement.

There must be something about Braco’s peaceful look and the infectious expectation of the audience that brings out peace and positive feelings in people that are already readily available.
Is Braco evil? An evil person does evil things and we have no proof of any wrong doing on his part.

What I pick up is that he is following the highest he knows and sincerely wants to help and heal people.

Does this mean he is without error? No of course not. Most likely some ego may affect him and he is subject to some illusion.

One very positive and unusual sign though is that he built his healing center with his own money and does much of his work for free. When he does charge it is a reasonable $8 which is in the range of all. Of course, when he travels and has to rent facilities he should charge at least enough to cover expenses.

Does this mean we can trust Braco to never deviate from the light?

No. I see no evidence that he has progressed beyond the second initiation and as such is still subject to illusions and if this assessment is correct then he could still be mentally tricked into making wrong decisions and doing quite a bit of harm while thinking he is doing the right thing.

This is why the seeker must – with Braco and every other servant – check and recheck with his soul on a regular basis or in the end he will be disappointed and wind up as the blind following the blind.