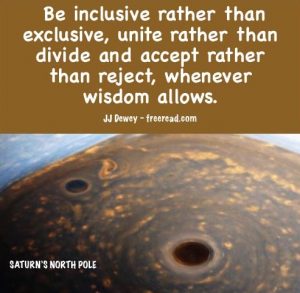 Many spiritual students are not only against a wall but are against borders themselves as well as enforcement of current law. Instead, these often support sanctuary cities which shield numerous individuals with a criminal background.

Let us examine some of their positions and see if they are in harmony with the Ancient Wisdom.

Argument One: Borders and walls exclude people. If we are enlightened we will include everyone.

Most students will agree that we should be as inclusive possible but the question is, should inclusiveness apply more to opportunity than access to all?

For the answer let us use the Law of Correspondences. A nation is merely a large group with rules, and that which makes it work corresponds to smaller groups such as organizations, businesses, families and even ashrams.

You would think then that if we wanted to understand the correct application of inclusiveness that we would look to the masters to see how they handle inclusiveness.

When we examine the teachings we see that the ashrams of the masters are inclusive in that fact that no one is denied entrance because of race, sex, nationality, social status, economic situation, education, looks or many other factors.

Does this mean that they will let anyone in?

Absolutely not. The opportunity to qualify is open to all, but qualify they must. DK says this:

“…in an Ashram only that is to be found within the sphere of influence of an Ashram which is of the soul. Nothing of the personality is allowed to enter in—personality reactions, disabilities, limitations, personality thoughts and all that is material and connected with the lower nature, never reaches the Ashram at all. … An Ashram is basically formed of those who through their knowledge, devotion and service have worked their way out of a group into an inner centre where the Master’s energy, wisdom and effort is more easily available. In order to work their way from the group into the Ashram, disciples will need most carefully to discriminate between their high grade personality inclinations, their responses to truth and ideals and their true soul reactions, spiritual wisdom and intuitive perception.

Not only are they careful who they will admit, but difficulties arise even when the applicant has done everything possible to qualify. DK tells us that when a new member comes in that, for a period of time, his added energy is very disruptive to the group. Much work is slowed or disrupted as the group goes through a period of adjustment. In addition to this the new member also has to adjust to the new and higher vibration. It would be destructive to allow in an applicant who has not done all to make himself ready, for it is problematic as it is to assimilate one who is qualified.

Most other groups follow the same process as does the Hierarchy. A business, for instance, doesn’t hire just anyone. They first take in applications, then do interviews and finally hire. Then comes the period of adjustment and assimilation. Fellow workers adjust to the new guy and the new guy adjusts to them.

Let us say the business needs ten new employees but only five apply. In this case, because of the need they have to seek out more. On the other hand, if 20 applied they have double the number they can assimilate wanting jobs, but to keep their business alive and well they need to reject the surplus ten.

The same principles that apply to small groups apply to large ones. Nations have certain cultures, structure and a quality of life they desire to maintain and are selective as to who they will let in and how many.

Mexico, for instance, has some pretty strict guideless on outsiders coming in the country. Immigration authorities must be assured that foreigners will be useful to the state well as have the necessary funds to take care of themselves.

Illegal immigration is a felony and anyone with false papers or entering the country with false pretenses could be imprisoned. Those who assist illegals are subject to prosecution.

Their constitution forbids non citizens from participating in politics or to participate in demonstrations or express opinions in public about domestic politics and there are no equal employment rights even for legal immigrants.

Overall, Mexico is much less inclusive toward foreign visitors and immigration than the United States.

The Pew research Center says that as of 2015, “the United Nations estimates that 46.6 million people living in the United States were not born there. This means that about one-in-five international migrants (19%) live in the U.S. The U.S. immigrant population is nearly four times that of the world’s next largest immigrant destination – Germany, with about 12 million immigrants.”

Overall the U. S. policies have been and continue to be generous toward immigrants and, like any other nation, group, or the Hierarchy itself, has the right to issue laws and qualifications and make sure they are followed so correct assimilation can be made.

It is true that the world is evolving toward a society of open borders, and that will be a good thing when the time comes that all nations have the resources and benevolence in government to take care of their own people. Unfortunately, we are not there yet and in current circumstances there is no condemnation in DK’s teachings of nations who protect their borders. We have the ideal set before us, but we must proceed one step at a time.

Here are some wise words from D K

“The Masters utilize the form to the uttermost; They seek to work through it, imprisoning the life in confining walls for just as long as the purpose is served and the race instructed through that form. Then the time comes that the form no longer serves the purpose intended, when the structure atrophies, crystallises and becomes easily destructible. Its destruction then becomes the matter of greatest concern and usefulness, and it goes, whilst a new form takes its place. Watch and see if this be not so. Always the building of the form, always its utilisation for as long as possible, always the destruction of the form when it hinders and cramps the expanding light, always then the rapid reconstruction of a new form. Such has been the method since the commencement of the aeon.”