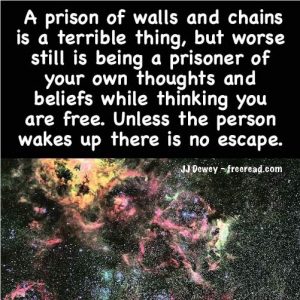 I normally stay away from political topics when writing on spiritual topics but in this case the current topic of whether or not to build a wall and enforce immigration laws overlaps into spiritual thinking and teachings.

The political left, as a whole, want no additional physical walls between the borders and do not want to enforce current law. Instead, most desire amnesty followed by voting rights and citizenship to those who are not legally here. Some support a degree of border security, but minimal deportation. Many support sanctuary cities that make it difficult to deport or punish those who have committed crimes. They seem unconcerned about criminals or terrorists entering the country and oppose any additional screening for them.

Overall, the left seems to want to put up a big welcome sign to all who want to come here and ignore all rules or laws to the contrary and label anyone who does want a wall as being racist. They s ay a wall is immoral.

The political right has a very different and opposing view.

First, they see nothing immoral about a wall to secure legal immigration.

They want enforcement of current immigration law, but complain that this is impossible without a wall. They say a wall works in other countries, citing Israel as a prime example. They say it has nothing to do with race, that we would apply the same tactics to Canadians if they were entering our county by the millions and taxing our resources. They say that they are happy to invite immigrants of all races if they seek to legally enter the country.

They say that current immigration laws need to be enforced because we do not have the resources to handle an unlimited number of people. Instead we must determine a number that we can assimilate and make laws around that number and enforce those laws.

Another main argument made is that we need to carefully screen those who enter our country to make sure we do not take in criminals or terrorists.

These two views do indeed clash with each other and have created a division among the people unlike anything since the American Civil War.

You would think that students of the Ancient Wisdom and alternative spiritual thinking would be united on this issue but even among those, who see themselves as more enlightened than most, do not agree here.

The true seeker must ask with an open mind, “What is the truth of the matter here? Should we have open borders and no or minimal laws or closed borders and strict laws?”

This subject touches seekers on such an emotional level that it is difficult for many to even discuss it without heated sensations welling up inside distracting from using the mind and reason. Nevertheless, let us attempt to look at the subject through the clear cold light of reason and established teachings and see where it takes us.

Let us first take up the ideas as to whether a wall is right or wrong in various circumstances.

When we look at numerous walls in history we find they are made for two purposes.

(1) To keep people imprisoned. Or

(2) To keep undesirable people out.

The most famous example of #1 was the Berlin Wall that created a virtual prison for the people of East Germany during the days of the Soviet Union.

As we look back on this, it is obvious to most of the people of the world that this did not have a positive purpose and to keep a whole country locked behind them was evil, and not a good thing.

On the other hand, walls to keep dangerous prisoners away from the public is considered by all nations to be a good and necessary thing to do.

Now let us look at #2. Are walls to keep undesirable people out a good or bad thing?

There are those who claim that a wall on our border is evil just as was the Berlin wall. This is indeed a disingenuous comparison as a wall to imprison inhabitants is a much different animal than one to keep people out. That is like saying a fence around your house is the same as one around a prison. This idea is not logical enough to warrant discussion.

So, let us look at examples of walls of protection in history. Have they been deemed good or evil?

Jerusalem has had walls around it since the time of its creation by David. They have been destroyed a number of times, but always rebuilt.

In addition, Israel today has a wall on its borders. Enemies of Israel want the wall to come down, but friends maintain that Israel would not exist today if they had not created the present system of walls to protect their borders.

The most famous wall in history is that of China to protect its borders. This is seen as a monumental work, but no one condemns the Chinese for seeking to protect their country.

Over a thousand years ago, in 846 AD, Pope Leo IV created the Leonine Wall, completely surrounding the Vatican Hill which still exists today. The present pope is against walls for the United States but has no problem maintaining his own walls.

Throughout history there have been thousands of cities, castles and estates that have used walls to keep out undesirable people and today many of the rich have wall around their estates including some who are against the U.S. wall. President Obama, for instance has an eight foot high wall around his place.

Have any of these walls of protection been condemned as evil by historians or the people?

I cannot think of any, but as we read about them we generally see that the various groups were justified in determining who could enter their domain and who could not.

But what about the general morality of a wall? Shouldn’t we be inclusive rather than exclusive. Wouldn’t Jesus want open borders and allow all to enter his domain?

Next, let us next take a look at the scriptures accepted by the Christ to see what direction they take us. After that, we’ll examine the Bailey writings.