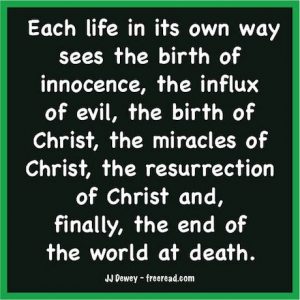 I was asked for more clarification on the overshadowing.

Some questioning the overshadowing have a Mormon background so here is an LDS scripture for them:

“And he received all power, both in heaven and on earth, and the glory of the Father was with him, for HE DWELT IN HIM.” D&C 93:17

The Christ is called both the Father and the Son in the scriptures. He was called the Son because he dwelt in the flesh, but was called the Father because he was polarized as the sending entity in relation to Jesus. The Father here spoken of who “dwelt” in Jesus was the Christ. Jesus has all power in heaven and earth because of his link to the Christ. We also have this same promise.

Neither Jesus, the Man, or Christ the Master of Masters created the worlds, but it was the Word (Logos) which is the aspect of the universal Christ that created all things. Both Jesus and the Christ were one with this aspect or “position” as Joseph Smith called it.

There is no argument about Jesus Being the Messiah (with the help of his Father of course).

I would suggest seekers read my numerous postings on this proving the doctrine from the scriptures.

I really had my doubts when I first learned of the overshadowing principle but when I opened my mind I received powerful undeniable confirmation on the matter.

The entity who incarnated as Jesus was Joshua from the time of Moses. His mission was to nurture a near perfect vehicle of expression that was to be used by the Christ who was Melchizedek in a past age. By vehicle I mean the combination of body-emotions and mind. He was to learn all that was possible in that age in order to provide the best possible means of expression for the mission.

At the baptism John saw the Spirit of the Christ descend and enter into Jesus. This spirit that entered into him was the “Son of God” without father or mother here on the earth.

This was much different from a walk in. It was the highest order of overshadowing and would more technically be called “divine possession.”

Mormons are taught that evil entities are not original, but copy and alter the things of God. Even so it is with possession. The difference is that evil possesses by force, but the good possesses with cooperation and free will.

When Christ entered into the body, Jesus did not walk out, but the two were in one body at one time. This was such an overwhelming experience that Jesus departed into the wilderness to fast for 40 days in order to commune with his Master and gain an understanding of how the partnership was supposed to work.

After the 40 days Jesus attuned himself to his Master’s vibration and the two minds functioned almost as one mind. It was a little like two entities using one mind – two keyboards – one computer, except the communion was through the science of impression rather than words.

This is why Jesus insisted over and over that he was not the originator of the greatest of the works and words such as in the following quote:

“Believest thou not that I am in the Father, and the Father in me? The words that I speak unto you I speak not of myself: But THE FATHER THAT DWELLETH IN ME, HE DOTH THE WORKS.” John 14:10

This is why Jesus said he represented the testimony of “two men.”

“Though I bear record of myself, yet my record is true: for I know whence I came, and whither I go; but ye cannot tell whence I come, and whither I go. Ye judge after the flesh; I judge no man. And yet if I judge, my judgment is true: FOR I AM NOT ALONE, BUT I AND THE FATHER THAT SENT ME.. It is also written in your law, that the testimony of two men is true. I am one that beareth witness of myself, AND the Father that sent me beareth witness of me.” John 8:14-18

On the cross the Christ left the body leaving Jesus alone. This is why he made the exclamation of the Father forsaking him.

I have written quite a bit on this subject. If you can’t find it let me know and I could post it again.

This is such a different doctrine than anything learned in any standard Christian belief that it takes strong spiritual sensitivity to consider it.

Good run down of the Holy Ghost from the Mormon viewpoint Brian.

Here are a few words I said earlier about the Holy Ghost:

“Here on earth we have individualized consciousness and we seem to be separate souls, but in the world of pure soul there is only one oversoul for all humanity and you and I are parts of that whole..

“This oversoul is an extension of the oversoul for the whole planet and the soul of the planet is an extension of the oversoul of the whole solar system and so on up the line. The Holy Spirit is a great Cosmic entity that works through the Oversoul. In addition to this there are representatives of the Father, Son and Holy Ghost within the Brotherhood. The Christ, of course, represents the Son for this planet, even though from another way of looking at it he is a Father (or sender) to us.”

The Holy Ghost is also called the Holy Spirit and in some writings the Holy Breath.

Communion with the Spirit is called different things in different circles. Some call it the “Still Small Voice” and others call it the God within. In my teachings I have most commonly called it soul contact, a phrase borrowed from Alice A. Bailey writings and has wider implications than contact with the Holy Spirit.

The first contact is almost imperceptible, and that is why it is called the “Still Small Voice.” This is intuitive contact. Then after the person follows the communication received, the contact becomes more sure and stronger. Then comes the time the person receives the baptism of fire which is a sure witness of direction and the purpose of God. This is communion sent through the Monad.

The raising of the Kundalini has to do with raising the natural fires from the lowest to the highest centers and is a different matter. This clears the channels for higher communication. All seekers regardless of their evolution can receive communion to some degree with the Spirit. Thus in the justice of God truth is always available to all who earnestly seek.