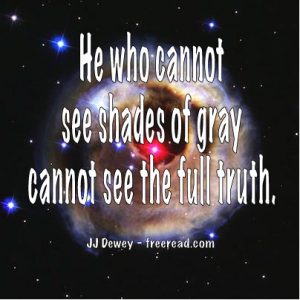 DK presents goals to which the Hierarchy is guiding us which basically covers these points.

(1) A world without borders – no passports needed

(2) One where brotherhood, goodwill and inclusiveness set the tone so we have right human relations.

(3) One where the Haves share with the Have-Nots so extreme poverty is abolished.

(4) There is to be a one-world government that unifies the world without becoming a tyranny.

(5) This will lead to a secure peace on earth.

(6) There will be a one-world religion which will basically be the world acknowledging through free will that certain universal principles are true.

(7) People will be influenced more by mind and reason than by lower emotion and being reactionary.

(8) People will becomes less materialistic and focus more on the spiritual.

(9) Christ and his associate Masters of Wisdom will walk openly among us as teachers of the human race.

Most students of the Ancient Wisdom, as well as many other seekers, embrace these points. Any differences come from not an acceptance of the end goal, but how to get there.

Humanity at present is a little like a family lost in the woods with no map or GPS trying to figure how to get out. They all want to get back to civilization but have different ideas as to which direction to go. The key for their survival is to calm down, carefully examine their options, and mentally come up with the best possible option to move ahead.

One of the hindrances to successfully moving ahead is that many take a simplistic approach to achieving the goal. They want everything to happen yesterday and think that we should just be able to make one huge step and magically arrive in earthly Shamballa.

Many go the other extreme and are discouraged by the inertia of progress and have little belief that any change for the better will occur. Others believe in a coming Armageddon, the results of which are so out of their control that the only thing they see to do is wait on God’s will.

The truth as usual is somewhere in the middle. We aren’t going to arrive at the golden age by taking a giant flying leap, but neither should we sit back and do nothing. All of us must do our part, for the destiny of humanity largely depends on actions taken by us as groups and individuals. Chaos will rule if we just sit back and let George, God, or the Hierarchy do it.

So how shall we proceed then?

Neither should we expect to change the status quo with one giant step nor should we sit back, but as the old saying goes we need to plough with the hoses we have. DK says what is needed is, “Practical ability to relate the idea to the ideal and to take those steps which will create the form of that ideal upon the physical plane.”

Concerning the development of a one world and one humanity D K says:

“This will some day be seen, but the time is not yet. Mankind is not ready for some super-government, nor can it yet provide the unselfish and trained statesmen that such a government would require. As yet, there are more seeds of danger in this concept than there are of helpfulness. Nevertheless, it is a dream which will some day materialise, after the creation and the functioning of blocs have proved how men should work and live together.”

Alice A. Bailey added this:

I realise that the only thing I can possibly attempt is to put certain suppositions before you, drawing upon my imagination. Naturally it is not possible for finite mind to gauge accurately the plan of the Deity. All that we can do is to study the history of the past, to investigate present conditions, and to ascertain somewhat racial and natural tendencies, and thus follow, as logically as may be, the various steps and stages. All that is permissible for us is to start from the solid basis of acquired facts and knowledge, then put them all together, and from their aggregate form an hypothesis as to what may be the possible goal. Beyond that it is impossible to go.

The Consciousness of the Atom, Page 119

We thus have to examine where we are at the moment and act wisely according to those circumstances. It can spell disaster to determine our actions as if the ideal were here. For instance, premature steps toward a one world could result in a Hitler-type tyrannical one world government – and this we must avoid at all costs. Indeed, we need to take the time to get it right, but when a move is placed before us we need to take it.

Some times the next move may appear to be a step backwards.

For instance, Abraham Lincoln always had a strong desire to eliminate slavery. A lot of abolitionists such as John Brown thought the best course was to violate the law and forcibly overthrow it. Lincoln didn’t see this as a solution for he thought it had to be accomplished within the law, not outside of it. He felt like we would not have a nation worth living in if there were no respect for its laws. Consequently, there were several times in his life that he had to take an apparent step backwards and support laws that governed slavery. That did not mean he supported slavery. Instead, it meant he supported the rule of law, even though some laws are imperfect.

On a lesser scale of importance I support traffic laws as a whole, but there are many speed limits with which I disagree. Still, if I get caught speeding I accept the penalty.

Two main points of contention right now concern immigration and refugees. What is the solution to these problems? Do we act as if the ideal were already manifest and completely open the borders, or are there wise incremental steps that can be taken?

We will explore this in the next several posts.