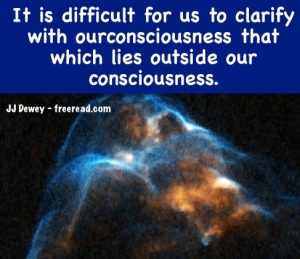 Can you think of a decision that is beyond the consciousness of most intelligent people?”

Let us say, for instance, that the plan of your life by Higher Powers, is to get incurable Cancer at the age of 50 so you can learn certain lessons. If you make a deﬁnite decision to live to be 100 it is possible to get an alternative plan from your soul as to how you may learn the lesson and override the original program. This is rare but it can happen.

Then there are times that your decision blends in with decisions of Higher Lives or a larger group. When this happens these inﬂuences must be taken into consideration if your decision is to be attained.

One thing we should understand as we continue in this vein is the principle of the “ring-pass-not.”

Let us say that a born again Christian has made a deﬁnite decision to go to a certain mountain on the first of next month and meet Jesus who he expects will snatch him up into heaven. Will this happen just because he has made a decision about it? Why not?

Remember that DECISION-CONSCIOUSNESS-ATTENTION is a key of knowledge. In other words contemplation on this key can lead you to greater knowledge.

Glenys gave a good answer to the deﬁnition of a ring-pass-not. I will repeat it here:

“My understanding is that, at the human level, it is a level of attainment beyond which a person cannot go; a stage in a person’s growth from which he or she is unable to pass onto a higher stage because of some inhibiting factor in his or her make up, usually a mental or spiritual delusion. However, it can be applied to all levels of creation from sub-atomic matter to the Planetary and Solar Logos and even the Creator itself.

“We all have our ring-pass-not. In most humans, it is the level of the mental body which extends well beyond the physical and enables them to operate at the lower mental levels. Soul contact would extend the ring-pass-not and allow activity on the higher mental levels.”

Jesus spoke the truth when he said that “nothing is impossible to him that believeth…” but to make the impossible come true, the ring-pass-not must be expanded. If we all examine our lives (or perhaps we should examine the lives of others – they are easier to see correctly) we will see that our ring-pass-not in some areas may be fairly high and in other areas may be low.

For instance, one person may understand many beautiful metaphysical principles yet his ring-pass-not in the real world makes it difﬁcult to pay the bills. How to create abundance for his self is beyond his consciousness, but mystical things are not.

There is a difference between expanding your ring-pass-not and your belief system. A belief that you can walk through a wall does not give you the power to do it. But if your ring-pass-not is expanded into this consciousness then you will realize this power is possible, and you can attain it if you desire.

The mere belief in the possibility has little power but is a good starting point to expand your ring-pass-not if illusion is dispelled along the way. Belief, even in something true, if it is mired in glamour and illusion, can become a millstone around the neck.

Question: What is the difference between one who believes he will live to be 100, but will not, and another whose ring-pass-not has expanded so he can really make this happen?