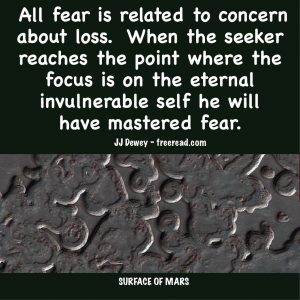 The question: What do you suppose are the basic fears that keep sincere people from discovering and accepting new truth?

A reader mentioned that the fear of the unknown is at the top of the list.

Yes, the fear of the unknown looms large indeed, but since many do not even think of the unknown, it does not enter into their consciousness to fear it so I would say that for the population as a whole a fear of failure or of being wrong would be number one.

But there is an underlying principle behind all fears which is the fear of loss.

One fears failure because of the loss that failure may bring.

One fears being wrong because of the loss of all that time spent in learning and defending that which he thinks is correct.

One fears ridicule because he thinks he is loosing esteem with his friends.

One fears change because he may lose the benefits he had before the change.

If all fears are related to a fear of loss then this fear of loss is the primal fear that keeps us from all truth. If this is so then what can we do to remove all barriers between the seeker and truth?

The answer is to remove all fear of loss?

And how do we do this?

The Buddhist may answer that we need to realize that we do not need anything, but for most of us this is an impractical answer as we are lifetimes away from this.

Here is an answer I have found helpful in my life.

Realize that as you progress upon the path that every loss is replaced by a gain greater than that which is left behind. The only way to not acquire that gain is to let it slip through your fingers or throw it away.

“But,” says the objector, “we live in a realm of dualities so the loss must be replaced by an equal gain – not a greater gain.”

Not so because we live in a universe that operates under the “law of dominating good.” Or “Becoming.” This law of dominating good, which we have briefly discussed in the past, causes progression to NOT take the form of an endless repeating circle, but an ever expanding spiral of circles. Thus at each new turn of the spiral the ring-pass-not has expanded and we continually have new worlds to explore and new gains to acquire.

He who overcomes his fear of failure does so because he realizes that the lesson learned through the failure is more valuable than that which has been lost.

Let me repeat the story of Edison here:

A reporter once approached Thomas Edison as he was working on the light bulb and said: “You have been working on this silly light bulb for years and have attempted 10,000 times to make it work and they have all failed. After 10,000 failures are you now prepared to admit that this light bulb idea is just a dream?

Edison wisely answered: “My dear friend. I have not failed as you have said. Instead I have successfully identified 10,000 combinations that do not work. I am 10,000 steps closer to success and do not have many more to go.”

Edison thus did not fear failure because he saw a gain behind each failure that was greater than the loss of time, money and prestige he had invested.

Fear of rejection in some form is probably the second most common fear related to loss.

And what is the loss that is feared here? This is usually a fear of loss in relationships that one holds dear, such as spouse, friends, group and family.

If you are seeking after truth and find a piece of it and those dear to you discover your belief about it they are likely to reject you and you may indeed lose them. Jesus talked about this very principle when he said

A way through this fear is the realization that old associations will be replaced by others who are more like what you are becoming so in the end your new circle of associates will be more rewarding than the old. You also have the reward of truth itself which truth always brings more opportunities of Becoming.

But perhaps the greatest overriding fear of one approaching the straight and narrow path between the two extremes of error is the fear of hell, the fear of God’s wrath, the fear of being wrong or guilty before God, the fear of losing one’s soul or eternal life… These are all related to the fear of the unknown because no aspirant knows for sure the true fate that awaits him beyond the veil.

What is the answer to this, the greatest of fears, as one moves along the path of light?

The answer is the current principle under discussion:

Faith in the “Dominating Good,” or a belief that God is good.

Or more simply put “faith that God loves you.”

“If ye then, being evil, know how to give good gifts unto your children, how much more shall your Father which is in heaven give good things to them that ask him?” Matt 7:9-11

How can we use this principle that Jesus taught to eliminate the fear that many have of offending God?

How do we know from this that if you are sincerely seeking truth and make a mistake while following the highest that you know that God will not become angry and send you to hell?