CHAPTER THREE
The Marriage of Atoms

It is interesting to study the marriage of atoms. In observing them, we must realize that every form, whether it be an atom or planet, possesses a consciousness and life peculiar to itself and is either positively or negatively charged. In other words, it is either male or female. The chemist calls the male atom a positive particle and the female atom a negative one. Within the atom we also have the positive or male nucleus, and the negative or female electron shells which are married to the nucleus to produce something greater than themselves – a whole atom. In the case of the marriage of the female electrons to the male protons in the nucleus, the ratio is always one to one. If there are seven protons, for example, as in the case of nitrogen, they are balanced off with the energies of seven orbiting female electrons. These sub-atomic particles, which are the building blocks of all form, never deviate from seeking this one-to-one ratio.

As we study the atomic and molecular world, we do so with purpose, for we seek truth in the ancient truism “as above, so below; as below, so above”. In other words, by studying the atomic worlds (the microcosmic) and the higher worlds of planets, stars, etc. (the macrocosmic) and corresponding their relationships with humanity, we can ascertain correct principles whereby stability may be produced. At present, social scientists tell us that three out four of our marriages are unhappy, or unstable. If we can find the secret of how tiny atoms achieve stability, we can then take those principles and apply them to humanity.

In addition to the electrons and protons, the atoms are also made of a third major particle called the neutron. This particle is relatively neutral and there is usually one or more neutrons for each proton in the atom. There seems to be no set rule governing the number of neutrons in each atom – just what is necessary to create stability. Most of the lower elements have an approximate ratio of one neutron for each proton, but some of the heavier elements have a ratio of approximately 1.5 neutrons for each proton. In each atom there is always a certain number of neutrons that produces the most stable atom. In carbon, for instance, there are usually six protons, six electrons, and six neutrons. This is commonly called carbon 12. This the most stable carbon atom. In nature there are also trace amounts of carbon with seven and eight neutrons. Carbon, with eight neutrons, is called carbon 14 and is unstable and is radioactive, and tends to break down to a more stable element.

To create balance, the protons (male energy) and the electrons (female) then has a marriage relationship with two particles: their opposite charge and the neutral neutron. In these three particles, we again have represented the energies of the Trinity. The neutron represents the Father (Purpose), the proton is the Son (Love), and the electron is the Holy Ghost (Light).

Protons and neutrons are composed of electrons and positrons, and have a mass more than 1800 times as large as either of them. A positron is the same as an electron, but has a positive charge. It is the general carrier of the male energy in the universe, just as the electron is the carrier of all the female energy. Within the proton itself is many layers of positrons and electrons of various energy levels, but the outer layer has a surplus of one positron, making it a male particle. The neutrons have a balance of positive and negative particles, making it neutral. However, this is only a relative neutrality, for even though all life forms are seeking balance, or neutrality, none of them are exactly neutral. Anything that has form is either male or female, but sometimes the energy difference is very slight. The neutrons are very slightly female. This evidenced in nuclear physics by the fact that neutrons will tend to throw off an electron (female energy) before they will emit a positron (male energy).

See the diagram of helium – figure 1 below: 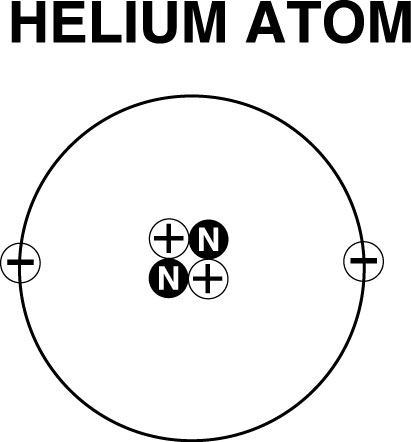 Then as we go smaller we find that the nucleus of the atom is made of up and down quarks. The up quarks have a charge of +2/3 and the down quarks have a negative charge of -1/3. They are always found in triangles which combine to either neutralize or a charge of positive one (except in anti matter where the charge would be -1).

Notice how the foundation block of creation is represented by Star of David. This microcosm is built on the number six as mentioned in the Immortal.

Protons and electrons are normally seen as having a uniform charge but some are slightly more charged than others. In our diagram of the helium atom, we have two electrons circling roughly like planets. Even though they are both female, or negative, one is more negative than the other; no two particles are exactly alike even if the difference is not yet measurable by us. Thus, there will be a secondary marriage relationship between the two electrons. The electron with the lowest negative charge assumes the role of the male and the other the female. The protons play upon each other’s energies in the same way and the electrons have some interplay with the neutrons. Thus, each particle has a Trinity of marriage relationships: one major and two minor. This Trinity of relationships produces the stable atom.

An interesting principle to contemplate is that all male and female energies in the universe are seeking stability, or neutrality. In other words, they seek to return to the energy of Purpose. The prodigal son of form is seeking to return to his father. This stability, or return, is always reached through marriage. Thus, marriage is a universal principle used to unite all male and female energies.

We have been talking about atoms in the microcosm, but there are also greater atoms in the macrocosm. Our Earth, with one moon, is like a great hydrogen atom, but the next true atomic correspondence is the Sun, with the planets circling it. On an even greater scale, the galaxies, which are composed of billions of stars, correspond to great positive and negative charges. Even the universe itself is a great ball of galaxies that will form a positive charge that will eventually become much more than an atom.

Man, who finds himself between the great and small atoms, is an atom on his own level and has the great destiny to create building blocks that will evolve into higher life forms through marriage, just as the marriage of atoms produced Molecules that eventually created life which finally evolved into man. So too must man create life greater than himself through marriage. This will lead us to the evolution of life consciousness hitherto undreamed of, and powers we cannot at present fathom, until man attains all the powers of godliness and creates in his own image a grand heavenly man.

The correspondence of man to an atom is most interesting to make. The physical body corresponds to the nucleus of protons and neutrons and the normally unseen aura that circles around him corresponds to the orbiting electrons. The nucleus of an atom has a mass of up to 4,000 times that of its electrons. So too does man’s dense physical body account for almost all his mass. The female energy circling man/woman has almost negligible mass and is invisible to him unless he trains himself to see it. When the aura is seen, the seer will discover beautiful changing colors, geometric shapes and an aura that actually revolves around the physical nucleus just as electrons dance within the atom. The true shape of man is then circular and he is in a constant state of rotation and movement as the atoms are.

Within man’s physical body and extending about a millimeter or two from it is his etheric body. This is the energy field that holds the physical body together and gives it its shape and vitality similar to the job of gluons within the atom.

Within man is also seven chakras, or force centers and concerning these much has been written. The first five are aligned up the spine and the final two are in the head. The first is the center at the base of the spine. This center enflames and supports the energy of all the other centers. The second is the sacral center and controls sex energy. The third is the solar plexus; it creates the desire nature and the emotions. The fourth is the heart center and from it issues love and wisdom. The fifth is the throat center and from it emanates the high creative energies of the artist and creator. The sixth is the Ajna center between the eyes, called the Third Eye; the energy that creates ideas springs from it. The seventh center is at the top of the head and it manipulates the energy of Will-Power-Purpose.

As a person progresses through numerous lifetimes as a human being, these centers of energy open and begin their circulation, and a corresponding negative or female energy circulates in the aura. A lowly evolved person may have only the bottom center or two opened, while a highly evolved initiate will have energy circulating unimpeded through all seven centers.

Correspondingly, the atoms have seven energy centers which open into circulation as the atom evolves from hydrogen to radium. These seven centers found in the orbit of the atom are called electron shells. The chemist designates them by the letters K, L, M, N, O, P, and Q It is interesting to note that radium is the first element to have all centers opened and it naturally glows in the dark. In the same way, a human with his centers opened will sometimes have such a strong aura that he will glow and have a visible radiance, like the Christ on the Mount of Transfiguration.

The most interesting correspondence for the sake of this treatise is that each atom is polarized in either positive or negative (male or female) energy and they marry each other.

The secret behind the marriage of atoms and the production of a stable Molecule is the master secret to the building blocks of the universe. This universal marriage, which we shall name Molecular Marriage, or The Molecular Relationship, creates for us a pattern that man must follow or remain forever separate and single, damned of his evolutionary progression. After eons and eons of time, humanity has finally reached a point where he must take his next giant leap into the evolution of life.
Copyright by J J Dewey

End of Sample Chapters. You can order the Book HERE