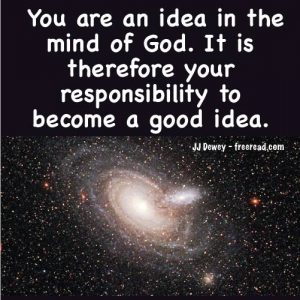 The Imagination of God

“What is the difference in saying that God and Its creations are unlimited rather than infinite?

“It is written that we are created in the “image” or that we are reflections of God. Does unlimited make more sense than infinite in relation to God working in us?”

“Unlimited says that there is no limit to the quality of God’s creations, but the quantity can still be finite. Unlimited suggests room for growth, while infinite seems to be saying that all of space has been used already.”

Infinite or infinity is a strange word when you think of it. My dictionary defines it this way:

“The state or quality of endlessness in space or amount.”

It is sometimes used with similar meaning to limitlessness or the concept of being unlimited, but it often implies the added feature of a number of parts that would be impossible to number or count. Infinity is a number so large that it embraces all there is and such a number can never become greater because it embraces everything. Infinite is especially seen in this light in referring to God or His attributes. Infinity in this aspect is seen as so large that no number could be added to it. Thus infinity + one is still infinity because the infinite already has to include the one.

Mathematically the answer is still infinity, but it boggles the mind to consider that eight times infinity is still the same number. Obviously there is illusion here.

Now I am going to present an idea that goes against standard thinking, especially in relation to God and creation and that is this. Infinity is only a theoretical number and does not exist in reality. If there were really such a number then any type of expansion or increase would be an impossibility because you cannot even add the number one to infinity.

Not necessarily. Because we do not know the number of worlds in the universe and have not been able to count them we assume on faith that the number is infinite, but we assume wrongly.

There is an interesting reason the universe and the creations of God is mistakenly seen as infinite and that is because the mind of God is unlimited. To understand the limitlessness of the mind of God we must look at our own minds since we are reflections of Him/Her/It. The foundation of all creation with our own minds is the imagination and correspondingly this would also apply to God.

Let us now see how unlimited your imagination is. Pretend for a moment that you are the One God and can create through your imagination. Imagine an infinitesimally tiny particle called an atom. Now imagine the atom multiplying trillions of times creating a living cell. Now imagine the cells doing the same thing multiplying into a vast number and organizing into a human body. Now visualize humans multiplying into the billions. Now visualize these billions of humans living on this large globe we call earth. Now visualize numerous planets circling around a sun so large that it could contain a million earths. Now imagine a billion such solar systems, no a hundred billion – let’s increase that to four hundred billion systems forming one galaxy called the Milky Way. Now visualize a thousand billion such galaxies forming a larger body called a universe. Now imagine that there are other universes out there and that billions of such universes form a greater universe.

Now here is my point. You are unlimited in what you can imagine BUT the time will come when you will take a rest from imagining and at that point when you take that rest there will be a specific number of units in that creation that you have dreamed.

Even though the mind of God and our own minds are unlimited all of our creations will have a certain number and will never reach to infinity.

Question: Why would it be that even though there is a number to all things that you or I could never find the end of the real creations of God, even in our imagination?

Your essence is like DOS and this existed as an idea in the mind of God before time was created. Your growth since time began for you is like moving from pure DOS to windows 95 then on to 98 and finally attempting to create a program that is relatively perfect. In this relatively perfect state you would not crash and all commands would flow and function without glitches. If any problem seems to be developing on the horizon you have the power to self correct before any disaster occurs.

Because your essence is an idea in the mind of God, or, in other words, you are part of that which God has imagined, then it would be impossible for you to out imagine God. That which has been imagined cannot out imagine that which imagined him. The computer program cannot write another program of a higher order than the programmer who imagined and created it.

So let’s put it this way. Can you imagine another solar system like this with an earth-like planet?

God has already imagined such a thing and created it.

Can you imagine a world out there in the galaxy peopled with beings of light living in perfect love and peace?

God has already imagined this and it already exists.

Can you imagine another world full of darkness far beyond that of the earth populated by beings we would deem as demons?

God has already imagined and created it.

Can you imagine other dimensions out there?

God has already imagined and created them.

Can you imagine a universe beyond this one?

God has already imagined and created it.

No matter what you imagine you cannot out imagine God. Therefore to us God is infinite, but in the higher reality He/She/It is merely unlimited and Its creations are beyond our capacity too even imagine even though they are all numbered and known to God.

Now as reflections of God our mission is to imitate Him and extend His work through first imagining a thing and then creating and perfecting it.

Now we have basically used this Law of Correspondences in just one line of thought over the past few weeks and in doing so have apparently solved some of the mysteries of the universe that have eluded scientists and religious thinkers for thousands of years. The direction and knowledge we have gained thereby just shows the power of this Law and why even the highest Masters still use it in their own discovery.

We could probably spend the next ten years in just discovering truth using this law. In fact we may to a degree for from hereon out we will be making mention of this Law as we move ahead in this course. Wherever truth will appear as we move along the path we will see that right next to soul contact, the Law of Correspondences will be there as a verification for the mind.

Now we have basically concluded that this Law can be of great help in the discovery of the truth, but how about the reverse? Can it also help us in the discovery of error? When we have power to discover error we are then aided through the process of elimination as mentioned earlier.

Let us pick a popular belief and see how it lines up with the Law of Correspondences. The Second Coming of Christ is a good one.

Many believe that in the end times (which is supposed to be about now) the world will become very wicked.

To protect the righteous God will rapture them into heaven completely off the earth.

Christ will come back in his wrath. He will appear in the sky visible to every person on earth having great armies of angels and send down fire to consume all who have not confessed a particular scripted belief in God and Christ. Afterwards the raptured earthlings will float down to the earth and Christ will turn it into a paradise that these righteous born againers will inherit for eternity

Now let us apply the Law of Correspondences to this belief. Does it fit? Why not?