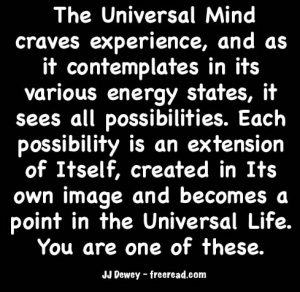 What is significant when we think of the key word “body?” The fact is that any life who manifests in the worlds of form needs a body to enter those worlds. Each of us has three bodies of form.

You and I could not enter into, explore and Become in physical reality until there was prepared for us a body of manifestation.

So what is the higher life above human?

Answer: It is a molecular life currently living on the mental plane waiting for a physical body to manifest.

What exactly is its body of manifestation?

Concerning this greater molecular entity – it is an individual totally apart and independent from you. You have never been It and will not evolve into It just as the cells in your body have never been you and will never evolve into you. In fact, all your cells die and are replaced by new cells periodically.

If you remove yourself from an original molecular body and move to a second body it should be obvious reasoning that you are not becoming the first entity.

The point I’m making here is that each entity is independent within its own sphere. It is dependent for life on the wholeness of it’s body but not the individual parts. Individual parts can move, or even be transplanted, from one body to another and the original body can remain unaffected as long as the parts are replaced.

To prepare a body of manifestation for a higher entity what must be done? We have already discussed in detail that one such body will be composed of twenty-four male/females. But that alone will not make a living body. Unless there is a link made with the Brotherhood of Light we have the equivalent of a stillborn baby. There is a body but it cannot contain a spirit. The connecting link with the brotherhood corresponds to the umbilical cord of a human baby. With no such cord providing the life giving blood there can be no living birth.

If we create a body and the Brotherhood gives life through the spiritual umbilical cord then the final step will occur.

An actual entity will incarnate and each of the twenty-four will be units in its body.

This is what happened 2000 years ago on the day of Pentecost when flames of fire appeared on the heads of the apostles. An entity incarnated and the disciples were the various parts of its body. This entity had different qualities other than human and because the disciples were a part of its body they were able to use these higher and unique assets of the higher life.

Question: When you reach a point where you reach relative perfection will your progression come to a standstill or is continual evolution somehow linked to a higher life? If so how does this help you Become or progress on an eternal basis?

The interesting thing here is that my comments and question seemed to raise more questions than they answered.

A reader wants to know if this spiritual evolution will make us extinct as individuals.

We will play out every possible dream and adventure that is within human imagination as the molecular order is expanded throughout the universe. After every dream has been accomplished and there are no more challenges from a human viewpoint then time will cease to exist and the principle of identification comes into play. All humans in the universe will eventually identify with higher lives. This identification principle is in a very embryonic stage on earth in the God kingdom and is practiced by the Masters and will soon be practiced by some of humanity in the Molecular Relationship.

When the lower life has filled the measure of its creation it then continues to progress by identifying with a higher life and living through that life with other lesser lives as if they are the one greater life. The personal individuality is still there just as it is with a cell in your body, but the whole becomes much more important than the unit.

Those who enter the Molecular Relationship in the near future will be infants in the principle of identification and it will take millions of years for us to master it. Nevertheless, the little we will comprehend as this next great step is made will create great change.

Question: Is that why some animal species just seem to disappear?

Animal species disappear because the form served it purpose for the animal entity. It is thus released and goes to a higher form within the animal kingdom.

There are three basic divisions of the animals.

(1) Microscopic lives that are capable of movement.

(3) Those lives we normally call animals and birds.

There is a big difference, however, in the application of the Molecular Relationship with plants, animals and humans. With the lesser lives the intelligence involved is supplied by great entities that preside over the lesser kingdoms, but with humans there is the privilege of joining our intelligence with greater intelligence to consciously participate in our next great leap in evolution.

Question: In what form will it incarnate? And what realm? It will no longer exist just in the mental realm but where else will it ‘reside’. It can’t be the physical because that didn’t happen at Pentecost.

JJ: This entity does incarnate into the physical. Its body as I have said, is composed of the twenty-four humans. Are the twenty-four physical entities? Of Course. Then is the new entity physical? Yes. Its body is not one of the twenty-four, but all of them. It’s form if you must have form is the symbol that represents the twenty four as it is seen on the plane of the mind and corresponds to the beginning of a crystal in the mineral kingdom.

Question: Wasn’t the entity at Pentecost the Holy Spirit?”

The actual entity that incarnated into the body created by the apostles was a different entity than the Holy Spirit. This entity being higher than human is more in tune with the Holy Spirit than are humans and when the Apostles identified with this higher life it caused a greater portion of the Spirit to work through them.

The Holy Spirit is a great spiritual entity that fills our whole solar system and is linked to all others such Spirits in other solar systems to bring about the grand purposes of God.

When we incarnate as humans we acquire a body which is composed of billions of tiny lives that are cooperating together in a molecular order so the lesser lives can have a greater experience through you the greater life. Now it is time for the human race to do the same and prepare bodies of manifestation that will draw forth greater lives so we can individually go in consciousness where no human has gone before.

Now when you die and leave your body behind and come back through reincarnation and take another you then stimulate the progression of a whole new set of lives. Even so, will the greater lives who incarnate in the Molecular Order be not confined forever to the same set of lives but will go through numerous bodies as they progress on their level.

Sterling spoke of a crystal that when the first is created that many grow quickly thereafter. This will also be the case with human molecules.

Question: We have said that an actual entity will come to the human molecule. Where do you suppose it will come from and what relationship will it have to Christ and his Hierarchy?