The eyes have been called the window to the soul.   No one can argue they tell more about our character than any other physical feature.  From the ancient Chinese to modern scientists, poets, and psychologists the search for the meaning of the eyes continues.

If you are not sure a person likes you or not, look at his eyes.  If he likes you, the pupils will be larger than normal in your presence.  If he dislikes you, they will be smaller.  If you notice someone’s eyes contracting, perhaps you have said something to offend  him.

The ancient Chinese had an art of eye reading called Siang Mien.  They observed the shape of a person’s eyes and interpreted his character from it.  Below are illustrations of various eye shapes and their interpretations.  Have fun figuring out the type of character you are sitting next to.

DRAGON EYES:
Dragon eyes are beautiful with nicely-rounded lids.  This person will generally make a great first impression because of the potency of his or her glance.  This person is magnetic, fun to be around, a good conversationalist, and intelligent, with lots of ideas . 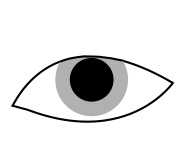 COW EYES:
Cow eyes are very rounded and smaller than dragon eyes.  These people are emotional, romantic, impulsive and direct.  They are quite honest and open about what they think and feel even to the point of offending another person. 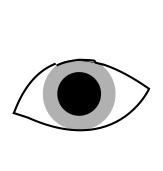 PEACOCK EYES:
These eyes are about twice as long as they are wide.  The standard peacock is a person  with very strong feelings and when something happens that frustrates his plan, he  will be very upset.  The intelligent peacock will reach great heights because of inner drive and resources.   The less intelligent may spend too much energy crying over spilt milk.

SLANTED PEACOCK:
Same as the regular peacock except more prone to jealousy, possessiveness and image.

TIGER EYES:
This person is farsighted, likes to set challenging goals and is able to persist until the goal is reached. He is curious and open-minded, but appears stubborn if you try to dissuade  him from an objective.

FOX EYES:
This person is also a goal setter, but would rather use cunning than hard work to achieve his objective.  He lacks patience and  wants all his desires to materialize now.

TRIANGLE EYES:
This person is very analytical and is ruled by the head rather than heart.  If anyone opposes him, he is likely to plunge into an argument and overwhelm his victim.  The larger Triangle Eye is more concerned with larger causes and events, whereas the smaller is more nit-picky and may hassle you over trivia.

NEW MOON EYES:
New Moon people are emotional and often psychic, but will follow their feelings toward selfish ends and are not beyond using deception.  Other good qualities in the face may counteract this, however. 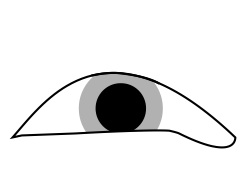