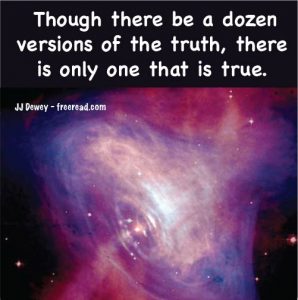 I think I struck a nerve by posting some information I found on Annalee Skarin from the web that put her in a negative light. I also gave a web address of the believer that you mentioned. That puts her in a positive light.

I think it is important that we look at both sides of any claim and make our only religion the truth wherever that leads us.

Some seem to see the quote I posted as if it has my full endorsement. I may also quote the New York Times, but I am always open to the possibility that something in that paper or any other source may not be true.

A reader says something that interests me about Annalee. He says that she never claimed to be translated, but her followers do.

Why would you believe something of her then that she never even claimed for herself?

I have given pros and cons on a number of books and have gotten some lively discussion because of it. I believe we should always be open to the possibility that our favorite sources may not be quite as perfect as we at first thought.

I do know this, that even if some of my favorite books such as those by Lobsang Rampa and Baird Spaulding were deceptions to a degree, that does not take away from the truth that I gleaned from them. Even if Rampa was a fake, he still taught me how to see auras. This does not justify the deception but it does verify that when truth and error are passed by the soul the soul can reveal the truth to the seeker.

If Annalee was translated that is fine by me, but I do not see much evidence pointing to it. Whether she was translated or not she did leave behind some very helpful writings and that is the main thing of importance.

As far as walk-ins go the questions is how could a person be a walk-in and not know this to be the case?

The answer is quite simple. It is the same reason we are born here on the earth not knowing who we are even though we all existed before birth. When we incarnate as babies we start with a clean slate and virtually know nothing in the beginning. All we have is our developed intelligence we brought with us.

When a person walks in a body vacated by another all he has for memory is the computer brain of the body he is now using. He is also wired for the similar personality and habits as the entity who departed..

After the walk-in the new entity will realize that a change in some of his thinking and attitudes has occurred but he will chalk it up to the idea that he just made a change in his life just as many other people before him have. As time goes on the new entity will feel a little like a stranger in a strange land and grow out of the old person programmed into the brain and into who he really is with a sense of the mission he came to fulfill.

No, I’m not a walk-in if anyone wants to know.

Would it violate one’s free agency to give your car away to another person when you believe he can put it to better use than yourself?

Of course not. Your car is not you and it would violate your free agency to be forbidden to give your car away if you desired to.

Even so, our bodies are not who we are. Instead they are vehicles that we use. A person giving his body to another for a higher use can be a great act of free will.

The Dark Brothers copy the brothers of Light with the difference that free will is not respected. The Dark Ones and low-grade entities are willing to possess another’s body against their will. This corresponds to the car thief who would steal your car, a much different thing than the situation where one gives his car as a gift.

The person who gives up his body is not usually so low that he is suicidal, but may be in a situation where his life seems to be at a dead end and has ceased making any progress. In this case, he may be approached on subtle levels by an evolved entity with some similar but higher qualities and asked if he wants to trade positions, for this particular disciple sees an opportunity to accomplish a great good in the situation that seems frustrating to the other soul.

One of the main advantages of the walk-in is that it saves a disciple 20 years of childhood and maturing. He enters with a complete grasp of the language and with a reasonable education ready to begin his mission.

Some have expressed doubts that we switch sexes periodically.

In the worlds of form there is male and female, but our essence, our intelligence that makes decisions is neither male nor female. This is hinted at in the scriptures:

There is no way for us to know all things and understand all things without the experience of both sexes.

I have taken many people back into past lives and the person was often a different sex in the past. Hundreds of others who have done regression have had the same experience.

Probably the main reason for doubt here especially among the Mormons is how this fits in with the concept of eternal marriage. Others who believe in the Twin Flame or Twin Soul idea may have the same question. I will be talking more about this as time permits.