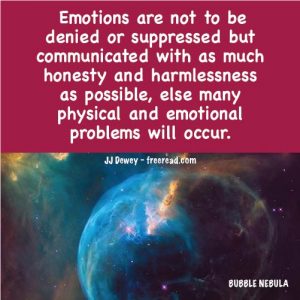 Question: Do you think that honesty and the keeping of your word will have a positive effect on health? Why?

Honestly as well as the keeping of one’s word has the important effect of lowering resistance to higher spiritual energies. One of the most common causes of disease is the resistance of the evolving pilgrim to the next level of energies released through the soul into our energy centers. If deceit or betrayal is found within our personal universe then the vibration is lowered and the higher light seeking expression is met with darkness. Thus does the vibrations of higher light sound a note that is off key and pitch and the discordant notes provide a fertile soil for the growth of disease.

What is emotional dishonesty?

It is basically when you feel one thing (usually negative) but communicate to others that you are feeling something else.

Why would one be emotionally dishonest?

Emotionally dishonest people are usually people with a strong desire for peace and harmony. Because of this when they find themselves with a negative feeling or grievance they will often refuse to acknowledge it in themselves or communicate it. Failure to face fear is involved here because this person often has a fear of not being accepted or hurting another’s feelings if he or she is honest.

The husband says: “Honey, I’m having Bob and Jim over for he big game tonight – make us some sandwiches would you?”

She does not like Bob and Jim and she does not want to make sandwiches. They can make their own damn sandwiches! Besides she was of the understanding that they were going to have a romantic evening together. Even so, she decides to pretend that all is well and fixes the sandwiches and delivers them with a smile. She thinks that she will create a major argument if she does not cooperate and this is the way of peace.

She is indeed deceiving herself and her husband here because, even though all seems to be well, there is an internal storm brewing within.

Mary enters the room and says to Bill: “You know that trip we are taking next week to Yellowstone Park?

“What about it?” says the husband Bill.

“Well, I’ve invited my mother-in-law to come along. I knew you wouldn’t mind.” Then she turns and walks into the kitchen as if all is well.

Now poor Bill will be absolutely miserable if the mother-in-law comes along, but he feels that if he protests that Mary will get very upset and a major disturbance will follow. So for the sake of peace Bill says nothing and pretends to go along. Again in this case there is outer peace but no inner peace.

Jim and Sue are watching Jay Leno and Pamela Anderson comes on the scene. “Wow! What a body,” says Jim as he takes a swig of beer. “I think I’m going to have a fantasy tonight.”

Sue is very quiet for the next ten minutes and finally Jim asks: “You OK?”

“I was just kidding about that fantasy thing. I didn’t hurt your feelings did I?”

Sue’s feelings are really hurt, but she feels that it is petty to be hurt over such a thing and says: “No. Don’t be silly. I know I’m no Pamela Anderson. You love me anyway though don’t you?”

Sue has a terrible feeling within her breast, but feels small-minded that it is even there and attempts to deny it out of existence, but a part of her remains aware that it is ever there, especially when Jim makes other insensitive remarks.

Question: What kind of health and spiritual problems can surface because of emotional dishonesty and why?

I was surfing through the posts of a rebel Mormon group, and I discovered at least three, possibly four, claiming to be the Messiah, and there might be others who have not come forth yet.

In addition to this there are hundreds of others claiming to be Messiah types on the internet. It doesn’t take much surfing to find them.

It is interesting to compare these characters to a real Messiah as the Christ was.

Did He proclaim: “Hey, guys! I’m the new Messiah. I’m reincarnated from a great one. Don’t you recognize me? How about being my followers?”

Instead Jesus went forth and taught and did mighty works and it wasn’t long before he did not have to make any claim for his works spoke for themselves.

The words of Jesus come to mind here:

“And he put forth a parable to those which were bidden, when he marked how they chose out the chief rooms; saying unto them, When thou art bidden of any man to a wedding, sit not down in the highest room; lest a more honourable man than thou be bidden of him; And he that bade thee and him come and say to thee, Give this man place; and thou begin with shame to take the lowest room. But when thou art bidden, go and sit down in the lowest room; that when he that bade thee cometh, he may say unto thee, Friend, go up higher: then shalt thou have worship in the presence of them that sit at meat with thee.

If we are not sure of our position it is best to take the “lowest room” for if we by chance are a beginner we shall not be embarrassed when the truth is revealed. On the other hand, if the Master says: “come up higher” we then are honored. There would be nothing more embarrassing than to think of oneself as a great avatar only to learn that the first initiation has not yet been taken.

Remember, the true disciple does not publicly reveal his status. He is prepared to work with no recognition if that turns out to be his fate. I cannot stress this too often.

I was asked if I had read the Keys of Enoch. Yes, I have read that book. I have the first edition and read it in the late 70’s. That is the only thing of Hurtak’s that I have read. I have not followed anything else he has done or written.

When you read revelations in other sites about energy grids, crystalline structures, DNA, language of light, Merkabah or Metatron you can bet they were influenced either directly or indirectly by Hurtak’s writings.