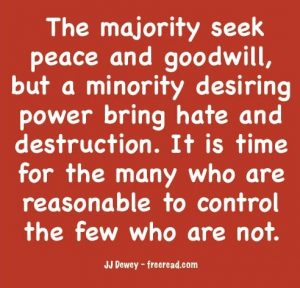 Many on the political left assume that the spiritual Hierarchy side with typical pacifist doctrine of unilaterally disarming the military and using the funds fo social and other idealistic programs. However, according to DK this is far from the case.

We’ve already discussed the Principle of Freedom which is supported much more by the Right than the Left, as many on the Left support restrictions of freedom by big government. DK was a big supporter of freedom and mentioned it often. He was one of the few metaphysical teachers who took a strong early stand against Hitler and for the Allies in order to preserve the freedom necessary for the new age. He criticized the United States for its isolationist approach before Pearl Harbor indicating that Hitler could have been easily defeated if the United States and Europe had been prepared and taken military action earlier.

Indeed Alice A. Bailey and DK were right wing hawks compared to the Left of today.

The Left of today are the main supporters of pacifism and disarmament, but DK was a stronger critic of pacifism than Ted Cruz or Donald Trump is today. He said this:

“I would say to those who preach a passive attitude in the face of evil and human suffering and who endorse a pacifism which involves no risks: With what do you propose to fight the forces of aggression, of treachery, evil and destruction which are today stalking over our planet? What weapons do you bring to this combat? How will you begin to stem the onslaught and arrest the whirlwind? Will you use prayers for peace, and then patiently wait for the forces of good to fight your battle and for God to do the work? I tell you that your prayers and your wishes are unavailing when divorced from right and potent action. Your prayers and petitions may reach the throne of God, symbolically speaking, but then the reply comes forth: The Forces of Light will strengthen your arms and turn the tide in your favour if you stand up and fight for that which you desire. Who will arrest the progress of aggressive selfishness if the men and women of goodwill rest back upon their idealism and do naught that is practical to justify their hope or aid in the materialisation of the desired ideal.

“There are those in the world today who (despite past national selfishness and wrong) are fearlessly and with true insight fighting humanity’s battle, and with them the Hierarchy stands, as it has ever stood on the side of liberty, right understanding and correct attitudes in human affairs. I would say to those who cry, “Peace, peace when there is no peace”: Are you going to profit by their death and sacrifice when the ultimate triumph of the Forces of Light comes to pass? Are you going to take the position that you can then live in a safe world because others gave their lives that you might do so? Are you going to issue forth from the safe security of your pacifist alibi and gratefully acknowledge what they have done and grasp your share of the gains which they have purchased at such a cost? I would warn you not to be glamoured by the false premise that you must stand by your hard-earned convictions, even at the expense of other peoples’ lives and the downfall of nations, forgetting that fear and false pride will make this argument of importance to you. Are the peace-minded people of the world going to reap the benefits of a peace for which they have paid no price?”

The Externalization of the Hierarchy, Page 233

If anyone were to speak this way against our enemies today he would instantly be called a right wing hawk.

Many of the spiritually inclined today embrace pacifism and demand the United States , NATO and other allies disarm and use the funds for social programs. This was the idea promoted by the idealists before World War II and the Allies were thus caught completely off guard and unprepared. If they had been prepared to keep the peace through strength then Hitler could not have posed a threat. DK affirms this by saying:

“I would ask you to exercise your imagination in an effort to visualise a world in which there is a complete defeat of the Allies, expressing as they do the ideals for which the Forces of Light have ever stood. I would remind you of two things: First, that these Forces were defeated in the earlier phase of the conflict thousands of years ago, and secondly that—if They again go down to defeat—it will be largely due to the unpreparedness and to the pacific attitude of the neutrals of the world. Had the Allies been ready (and that in itself would have indicated attitudes similar to those now being expressed by Germany) and had the neutrals stood together from the outbreak of hostilities and proclaimed as one voice: This thing must not be—Germany would then have been arrested in her triumphant progress.

“The Allies, however, were not prepared for the onslaught of the forces of evil; on the physical plane, their position was not impregnable. The neutrals at the same time have chosen and are still choosing the negative and weak way; and through fear, a misplaced idealism, or a separative spirit, plus the failure to grasp the acuteness of the world crisis and its significant implications, have placed humanity in a position of imminent though not inevitable disaster. These are points which require careful consideration and consequent readjustment of the attitude of those who are doing nothing to further the efforts of the Forces of Light and of the men of goodwill throughout the world.” Externalization of the Hierarchy, Pages 239-240

Further he says that the pacifists “cannot believe that a God of Love could possibly employ the first divine aspect to destroy the forms which are obstructing the free play of the divine Spirit; that Will must not infringe upon their interpretation of Love. Such people are individually of small moment and of no importance, but their massed negativity is a real detriment to the ending of this war, just as the massed negativity of the German people, and their inability to take right action when Hitler’s purposes were disclosed, made possible the great inflow of ancient and focussed evil which has brought the present catastrophe to man. Such people are like a millstone around the neck of humanity, crippling true effort, murmuring, ‘Let us love God and each other,’ but doing nothing but murmur prayers and platitudes whilst humanity is dying.       Externalization of the Hierarchy, Pages 345-346

Then he struck another blow toward the idealists who see themselves as above any conflict.

“When the war broke and the entire world was hurled into the consequent chaos, horror, disaster, death and agony, many spiritually minded people were anxious to stay aloof from the struggle. They were not the majority but a powerful and noisy minority. They regarded any attitude of partisanship as an infringement of the law of brotherhood and were willing to sacrifice the good of the whole of humanity to a sentimental urge to love all men in a manner which necessitated their taking no action or decision of any kind.” Discipleship in the New Age, Vol 1, Page 784

“Those who refuse to share in that struggle for freedom will be left out of the gains of freedom, “ Externalization of the Hierarchy, Page 253

“Humanity having decided to fight out the battle physically, there was nothing left to do but issue a challenge to the men and women of goodwill to take their stand on the side of such action as would release humanity through the destruction of the evil forces. These had determined to prove that might was right. Therefore, the forces fighting for progress and civilisation had to meet force with force. “ Externalization of the Hierarchy, Pages 178-180

Today we face a greater threat than Hitler because of nuclear weapons held by unfriendly nations and more to come from very antagonistic nations such as North Korea and Iran. Yes, peace through strength is expensive but it is a cost we must pay to prevent a conflict worse than World War II

“It is only when the vision and dream of peace—which beguiles so many well-meaning people—gives way to the determination to take every possible means to achieve that peace in practical ways upon the physical plane that the inner spiritual forces will be enabled to work also more actively on earth.” Externalization of the Hierarchy, Pages 256-257

His (Christ) work has been greatly hindered by the sweet sentimentality of the unthinking Christian and by the well-meaning, but oft unintelligent, pacifist. Both these groups would sacrifice the future of humanity to temporary methods of “being nice” or “being kind” or taking gentle measures. The forces of evil, stalking the world today, do not understand such measures … the simple-minded are apt to forget that the Christ said, He that is not with me is against me.” Externalization of the Hierarchy, Pages 476-477

“Let the soporific of beautiful peace talk die out and let sane methods of establishing goodwill and right human relations precede the discussion of peace. The world talked itself into a dreamy state of idealistic rhapsody about peace between the first phase of this world war and the present one. This must not again occur and it is the task of the intelligent humanitarian to prevent it. “Externalization of the Hierarchy, Page 444

Unfortunately many on the political left want to slash the military budget and funnel those funds into social programs. This is what happened after World War I and DK says this state of unpreparedness to put down evil “must not again occur and it is the task of the intelligent humanitarian to prevent it.”

It would be nice if we did not need to spend any money on defense and had no concerns about rogue nations unleashing nuclear bombs, but such is not the case. As it is, we must secure peace through strength for that is the only deterrent of the forces of evil as conformed by DK