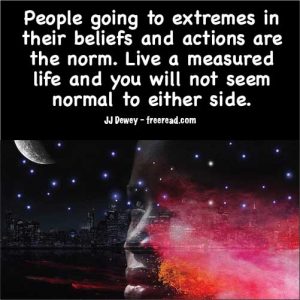 Seeing the Point of Truth

Question: “In the past we talked about the line of least resistance and the line of most resistance. How do you suppose these two paths play out in the Pendulum Principle?”

When we talked about these two lines (or paths) we mentioned that the “go with the flow” idea is based on illusion.

The swinging of the pendulum manifests among humanity by their swing to the left and right in their belief systems.

For instance, in the forties and fifties the media was so puritanical that all married couples had to be seen sleeping in twin beds. Now they show us more sex than is necessary.

A couple hundred yeas ago government did next to nothing to assist its citizens. Now they are turning us in to a bunch of dependent whiners by attempting to do everything for us.

Fifty years ago you could insult anyone you wanted with slurs but now you have to be very careful with your wording or you will be considered politically incorrect.

As the pendulum swings among us the masses swing with it not realizing that they are following the energy much more than they are doing any independent thinking.

Those who go “with the flow” give energy to the pendulum to swing to the extreme of the direction it is heading. On the other hand, those who apply the path of most resistance work to make the pendulum swing the opposite direction so it will again pass over the center point. When it makes that pass a truth is available to be seen. When the truth is seen what effect does it have on the next swing of the pendulum?

As the masses swing from one extreme to another a point of truth at the center is sensed (however dimly) and a yearning is created within the hearts of seekers to return to that point. This desire for return creates a counter force that slows the swing of the pendulum and pulls it back in the opposite direction.

The force of the pendulum is therefore seen swinging in all organizations, belief systems, political systems, economies, etc.

Under normal circumstances here is how it works:

The swing to the right is always powered by the force of conserving that which is beneficial from the past.

The swing to the left is always powered by a desire to replace that which does not work from the past with something more workable in the future.

Both of these energies take the swing of the pendulum past the point of truth to an undesirable extreme. When the illusion of the extreme finally dawns upon the masses through obvious harm or error (such as a Hitler) then the pendulum changes direction, but an over correction occurs.

But here is the good news.

The over correction that forces the pendulum past the center does not then swing as far in the new direction as it did the old. This forces a natural slowing down of the swing so gradually the point of truth in the middle becomes more obvious to the many rather than to only the few. When finally the point is seen by all, the truth is then incorporated into the everyday lives of the masses and attention is then diverted to a new pendulum with new swings and the problem of discernment surfaces all over again.

But the fact that new truths are periodically recognized creates the power of the dominating good that is spoken of in the ancient wisdom.

The funny thing is that when the truth at the center is seen by the masses they each believe that if they had lived in days of old they would have seen that truth which is now so obvious.

For instance, we of this age clearly see that the message of love and tolerance that was brought by Jesus is a vast improvement on the strict laws of Moses. The pendulum has swung back and forth enough times now that this truth has dawned on the basic consciousness of humanity.

When Jesus was crucified he only had 120 followers. But the strange thing is that I have asked numerous born-again Christians if they believe they would have been one of those 120 and without exception they answer yes.

How little do we know ourselves.

The truth of liberty and the incorrectness of slavery is another example.

Until recent history slavery was thought to be a necessary part of civilization and was accepted by all but a few high minded souls.

Yet if you pick most any person and ask if they had lived in the old days if they would have accepted slavery they almost all emphatically answer no. Surely they would have realized that slavery was wrong, they think.

Again, how little do we know ourselves.

Over 90% of those living now who love the message of Jesus and abhor slavery would have bought into the mass thoughtform, or the flow of the energy of pendulums past. To further understand why this is so you might want to go to the archives and read my posts on the Milgram experiment.

The path of least resistance supports the current swing of the pendulum. For instance there is a swing at present toward being politically correct and not offending anyone.

On the subject of political correctness this force against the flow would be represented by people who are willing to speak words in public that may cause them loss of jobs and friends. Those who change the direction of the pendulum will not use obviously inflammatory words such as the “N” word, but will rebel when others attempt to restrict their speech when that speech is harmless.

For instance, I was recently criticized by a friend for calling one of our customers an Oriental. I was told that I should have discovered her race and call her what she correctly is.

The truth was I was not sure if she was Japanese, Korean or Chinese so “Oriental” was the only fitting word I could think of. This was harmless in my eyes, but not to the thought police out there that is roaming rampant.

This fanaticism of correct speech is indeed an extreme that will be due for correction in the near future. On the other hand, even though the practice has been taken to the extreme (as all swings of the pendulum do) the end effect is that the masses will be less slanderous in their speech. In other words, even though the pendulum will swing to another extreme, the next extreme will not be as harmful with fewer insults than the last one.

Overall, there are nine ingredients that make up the whole of the pendulum and its swing.

(1) The force that swings to the left.

(2) The force that swings to the right.

(4) The force that swings to the center point of truth

(5) The point where the pendulum is attached.

(6) The source of the initial power.

(7) The time and distance between swings

(8) The purpose behind the swing.

(9) The effect produced after the pendulum finishes its movement.