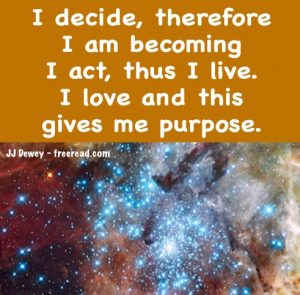 “I just wanted to share an experience that happened to me today that taught me a great lesson in humility.

“I was driving down the road with a friend of mine and was preaching all this stuff about sub-atomic energy, and being able to control it to manipulate reality by what you expect to happen. to the point where I got carried away and suggested that by feeding positive energy into my car it wouldn’t give me any problems. I’ve had this car for about 2 years now its an old 89 but it has never really given any problems. but just as I finished spewing off all this stuff my muffler fell off and started dragging on the ground. Other cars were driving by me and waving to me, and as I pulled up to lights my car was sounding more like a Harley.

“As I reflected back I realized not to let spiritual knowledge turn into a spiritual ego.”

It sounds to me that perhaps some spiritual force was going out of its way to teach you a valuable lesson.

My approach to truth is to seek all I can on my own and then when I reach dead ends I seek from higher sources. One of the greatest sources of truth is just plane observation.

I have met a lot of people who have sought their heart’s desire to come to pass in some way that does not involve much effort. Many there are who are preaching a short cut. There are shortcuts in going to heaven, in getting off the wheel of rebirth, of obtaining money, fame and fortune.

In almost every case these individuals either are, or wind up, near-do-wells. Most of those with a shortcut mentality wind up falling far short of their dreams often barely eking out a living and depending on others for their welfare.

Now every once in a while a true shortcut does appear and when this happens we should take it. Generally when this happens the principle is fulfilled where preparation meets opportunity, but the shortcut mentality is really a lazy mentality that leads the seeker further into illusion and will often cost him a lifetime or more of effort because of retrogression.

One of the things that cause many to seek illusionary shortcuts (in addition to laziness) is that some who have succeeded have appeared to do it fairly effortlessly. This causes many to think: “If he did it so easily, why can’t I? Perhaps there is some magical means…”

The are two problems with this.

First, often the successful one delivered a super human effort behind the scenes that of which the public is unaware.

Second: In the few times success comes easily, it is usually because of hard work and sacrifice laid in a past life creating good karma for this one. If we could see the whole picture we would find that what appeared to be a shortcut was merely a slow ascension to the top. The person just took the last two steps in this life so what he accomplished just looked easy.

The best overall shortcut is to discover principles based in reality that you can understand. If you cannot understand a principle then you have little chance of successfully using it. Eventually we can achieve great power through a step by step learning process and be as the Christ and his associates who appear to use shortcuts by our standards, but have learned “precept by precept” as Isaiah states.

Next we’ll briefly discuss the purpose of existence. I will give you a perspective you have probably not heard before.

In the beginning there was one life which was God who was in a state of BEING. This state incorporates the subtle energy of Purpose which has all possibilities within it.

When God realized he was alive he reflected himself toward infinity and advanced to a state of BECOMING in cooperation with all his reflections.

The process of BECOMING resulted in much imperfection and a slow trial and error process toward improvement.

Finally the desired end came into view and God advanced into the third phrase of his existence. He decided what the end should be and all the lives of God eventually advanced to BECOME THAT WHICH THEY DECIDED TO BECOME.

Because we are created in the image of God we go through these cycles also. There was a time when we realized that I AM. After this realization we advanced to I AM BECOMING and finally we realized that we can mold our destinies and we arrive at BECOMING WHAT WE DECIDE TO BECOME.

The smallest lives up to the one God go through this Trinity process over and over in more and more advanced circumstances. There is no way that God himself can even avoid BEING, BECOMING and then deciding on the most perfect end in view.

Because the end of each cycle and universe is the result of decision, that end is always a desirable or “good” one. This is the reason good dominates throughout all creation. Order always dominates over disorder as a whole.

Keeping this in mind what should our purpose be at this very moment of our existence?