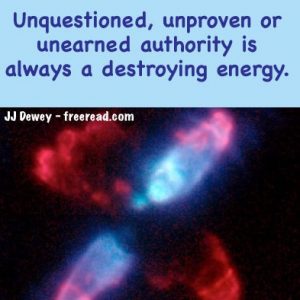 Alice A. Bailey was indeed a scribe for most of the books under her name. She received them from Djwhal Khul, a Tibetan Master who was said to be one of the three wise men from the east in a previous incarnation. He is around 300 years old and is sometimes called the “messenger boy for the Gods” because he is fairly young as far as the age of Masters go.

Alice A. Bailey’s writings were not channeled through direct voice, but by mental telepathy with full conscious awareness on her part. In fact they would sometimes disagree with the wording of the transmissions but overall Djwhal Khul was pleased with the accuracy of the final product.

Give an example of an earned authority for:

How can you use an earned authority to help in your progression and discovery of truth?

We’ve had several good responses on this.

“If one wishes to perform algebra accurately then one would seek guidance from an authority, either a teacher who can demonstrate competence in algebra, or a book which one believes has intelligible instructions. One then ‘plants the seed’ of accepting the authority and sees if it “bears good fruit”, i.e., leads to your competence to perform algebra. If it doesn’t then you discard the authority and seek guidance elsewhere.”

We have two extremes demonstrated in our society as far as authority goes.

One extreme relies almost 100% on authority, often unearned, and refuses to consider any knowledge outside of their authority structure. In other words, their ring-pass-not consists of the authorities in their lives.

The prime example of this is the ultra religious person who accepts their scriptures, or the spokesman for their scriptures, as infallible and would accept that the moon is made of green cheese without question if the authority told them so.

The other extreme is the person who gives no weight to any outside authority. With such a person there is no one you can quote to add any weight to your argument for the only authority that has any weight with them is the inner self. Unfortunately, it is usually the inner lower self which is wrong most of the time.

New Agers cling to this extreme. Many have read some book telling then that all is within and thus there is no authority that one can use to teach them. The interesting thing is that such individuals have not usually escaped authority as they suppose for they are often rigidly following the book or teacher who told them to look within.

The Course in Miracles seems to have this effect on many. Even though it has many inspired teachings within it, misguided souls use it as an authority to reject all authority that disagrees with their mindset and thus a book, which could be elevating, causes many to stand still in their progression.

This does not mean that the book does not have merit for even the Bible has this effect.

The disciple treading the Middle Way between the two extremes will walk neither of these paths. Instead he will use both the outside and the inside blended as one divine whole to find truth. That which proves itself as reliable on the outside is given weight and passed by the soul within with no preconceived notions. Then when the soul vibrates the right chord the searcher will realize a higher level of truth than before.

There are many authorities that are easy to verify that they are indeed an earned or proven reliable in what they do or claim. For instance, it would be quite simple to prove whether or not the algebra teacher is a true source of knowledge of algebra. It would also be quite easy to discern whether or not the Spanish teacher is a true authority on Spanish. Their very teaching will prove this one way or another.

If AJ Foyt wins races consistently then that is proof that he knows something about the subject and listening to his advice would be productive if you wish to race also.

If Jay Leno makes you laugh every evening then it is a good bet that he is a good enough authority on humor to make you laugh again tomorrow.

In other words, we have trust in earned authorities for what they will, in probability, deliver tomorrow because of what they have consistently delivered in the past.

If Jay tells a joke and the whole audience roars with laughter, but nothing seems funny to you, it would be wise to consider that maybe you missed something.

Because you know from past patterns that when the audience roars with laughter at something Jays says, that there is a reason for it.

Unfortunately, there are other areas of life where just and unjust authorities make claims that is much more difficult to discern.

For instance, he may have a plan to improve education that costs a billion dollars. His ideas sound good, but when the billion dollars is spent maybe the quality of education actually goes downhill. Now some will consider him successful just because he spent a cool billion, yet others will be looking at the end result and reject him as a just authority.

He may claim his program did not work because he really needed two billion and they should trust him a second time.

Unfortunately, there are many unthinking who continue to support the unproven as authorities just because they “sound good” or fill a personal need or mindset.

Finance and success is another area where many unproven authorities find fertile soil. Have you noticed that about two-thirds of the people out there preaching success and abundance have little of either?

Have you noticed that most of the true successful people don’t really say much about their success but just go forward and demonstrate it? Yet time and time again people hire financial advisors who have done nothing in their lives but advise and success motivators who have only succeeded at convincing others that they are successful.

Perhaps philosophy and religion are the most ephemeral as far as proving reliability because of the number of forms the various doctrines will take and the difficulty in proving the teacher right or wrong.

There are three major tests to apply to a spiritual teacher before he should earn any of your trust for reliability. Can you guess what they are?