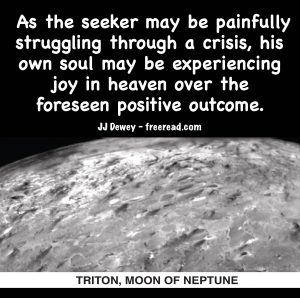 Note written April 2019: For the first year of my posting on the web I revealed virtually nothing of my background as I wanted readers to pay attention to the message rather than the messenger. Finally, a Mormon reader specifically asked me if I was connected to his or any other religion. Here was my answer:

As you may have guessed by now I do have a Mormon background; however, not a very recent one. About 22 years ago I was active in the church.

I made the mistake of “searching the scriptures” and discovered some interesting things therein, which are not a part of standard doctrine. Mormons believe we go to one of three kingdoms after death and we are stuck in the assigned location for eternity.

I discovered that there is progression from kingdom to kingdom, not just within the kingdoms as the church teaches.

I wrote a short paper on it, but had a problem in that I had no one to share it with. Then my nephew visited for a time and I told him some of my thoughts and shared my writings with him. He became convinced and was very enthused about it. I told him to be very careful about who he showed it to or he could get in trouble with the authorities, but he didn’t seem worried about it.

He went to his home ward and began teaching the doctrine in Priesthood class and showed the writing to his Elder’s Quorum President. Shortly thereafter he was ushered in the bishop’s office and within a few days a full-blown trial was scheduled with the high council. When he learned that the only witnesses that he could have were members in good standing he thought of me.

He called and asked me to defend him at his trial.

I told him that if I did I would probably be excommunicated too and may lose my wife and kids.

He said: “You got me into this, now you must help get me out.”

I sighed and told him I would be there.

I went to his trial with my friend Wayne who was an inactive member, but still an Elder and they were not going to let us in to testify, but using every coercion at our disposal we elbowed our way in and gave our testimonies on his behalf, but of course it fell on deaf ears.

Shortly afterwards, the transcript was sent to headquarters a trial was ordered for me. When they discovered through interrogation that I believed several things that were not part of regular church doctrine the council composed of life long friends excommunicated me.

The interesting thing is that they had to violate their own rules to throw us out for we both were obeying all the rules of the church.

Anyway, that was a long time ago and I could write a book on the whole thing but to make a long story short I continued my search for truth and as I found them, piece by piece, I began to see how they all fit together into a complete whole and how the LDS church as well as the teachings of Joseph Smith blend into everything.

Like you, I explored fundamentalism, but never got involved with it. Instead of draining a few morsels of truth from the past I sought the future and have had great and important principles revealed that I am now sharing. There is much more for me to give out than I have posted so far.

I have studied numerous religions and points of view and have decided to present the teachings from a cosmopolitan point of view free of religious connection for identification with an orthodox religion is a big turn off to many who may otherwise be open to the truth.

Since it has been 22 (now over 40 years) years since I have had a link with any religion I am quite honest in presenting myself as detached from religious dogma. However, I still remember well how the members think and my knowledge of Mormon doctrine is yet clear even though I have not studied it for many years.

I have written a book called “Eternal Lives” which proves reincarnation from the LDS point of view. It also answers questions about baptism for the dead, eternal marriage and many other details.

This book is mainly written for people with an LDS background, but there are many things of interest for any seeker.

For more reading on my journey readers can go to these additional links.

The first is a fiction story called “Journey’s End.” The part covering the trial of Curtis; however, is non-fiction. The trial is an accurate recollection of the event. What follows after is mostly fiction.

These additional links are to a history of events after we were excommunicated including a visit to the leadership of the LDS church.