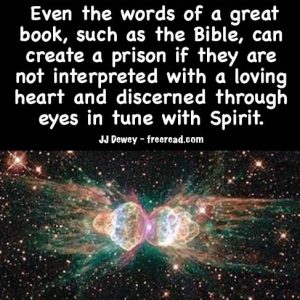 I am still getting questions on the atonement. A reader makes this comment:

The scriptures are full of teachings about baptism being an essential ordinance for salvation. Jesus himself said as much: “except a man be born of water and of the Spirit, he cannot enter into the kingdom of God.” [John 3:5]. Jesus himself even was baptized, although being free from sin, he had no reason to. It was important enough for Christ to do!! Now you teach that such is NOT the case. That baptism is a “dead work”.

JJ: As I said numerous times, baptism by itself is a dead work. If the symbolism behind baptism is seen and understood then it has a living effect. All must have the effect of baptism occur in their lives to enter the kingdom of heaven. Because Jesus had this effect already occur, John the Baptist acknowledged that he did not even need the physical act of baptism, but he (Jesus) went forward anyway to set the example for that age.

True baptism is the birth into the consciousness of the spiritual life. The moment your attention shifts from the carnal to the spiritual and does not look back, you have been baptized whether or not someone puts you under water.

The physical act of baptism was instituted to assist in focusing the mind of the earthbound person toward the spiritual goal. It is a good idea to not only get baptized once, but every now and again to help keep the mind focused on the spiritual rebirth. They did this in the early Mormon church.

Comment: You seem to teach there was not a sacrifice for remission of sins.

No I do not teach this. I teach that this principle is not understood correctly. As I have said many times to sin means “to error.” The shedding of the blood of Christ did much to correct our errors. I have written a considerable amount on this but I will add this. The life, crucifixion and resurrection of Christ corrected error (or redeemed from sin) those who had eyes to see. This is one of the meanings of the atonement. His example lifted up our eyes to the soul where the at-one-moment – the Holy Instant – happens and a change in direction (repentance) occurs.

Some have difficulty in associating the atonement with the removal of guilt. Do you think the atonement does not remove guilt??? I would say it is pretty useless if we are yet left condemning ourselves through guilt.

A reader expresses concern that I indicated that some of the prophets of old had an imperfect understanding or taught doctrines adjusted to the consciousness of the people..

My emphasis was not on the idea that the prophets were wrong. I’m saying they had to plow with the horses they had. They had to adjust their teachings to the consciousness of the day. It is also entirely possible that they did not understand many things correctly. After all, they were not perfect and were ordinary people like you and me. If any person believes the word of any man, angel or god above the Holy Spirit within he has the mark of the beast.

Comment: You consistently ignore scriptures that disagree with your point of view. I mentioned two in my first Atonement post. One was from D&C 19. This is a modern scripture, from a section you also like to quote from. A scripture that was given in English (no translation issues). A scripture that was “after the time of Christ.” Christ is speaking, and in his own words — as clear as a bell — he testifies that he DID suffer for our sins, and that he is now our creditor (a merciful, kind and generous one, at that), but that if we refuse his terms, then we must suffer the rightful consequences of our actions, even as he has done so for us. I’ll cite the verses once again:

D&C 19:16-18 “For behold, I, GOD, HAVE SUFFERED THESE THINGS FOR ALL, THAT THEY MIGHT NOT SUFFER IF THEY WOULD REPENT; But if they would not repent they must suffer even as I; Which suffering caused myself, even God, the greatest of all, to tremble because of pain, and to bleed at every pore, and to suffer both body and spirit.”

It doesn’t get much clearer than that.

JJ: It must not be that clear because the revelation was not talking about the atonement – at least not the atonement that is preached in the churches.

What suffering was he talking about here?

Verse 20 gives a clue: “Wherefore, I command you again to repent, lest I humble you with my almighty power; and that you confess your sins, lest you suffer these punishments of which I have spoken, of which in the smallest, yea, even in the least degree you have tasted at the time I withdrew my Spirit.”

This revelation was given to Joseph Smith and it had meaning to him at that time quite beyond what readers who came afterward gleaned from it.

Joseph had a molecular link with his Master and when this occurs there is a circulation of spiritual energy to a much higher degree than transpires with the normal seeking aspirant. What many do not realize is that there is peril in every step forward we make on the spiritual path. If we endure to the consummation (end) then all is well and life is increased, but if we betray the light we have received the spirit withdraws and the darkness and pain experienced can be great indeed. In addition to this if the circulation of the energy is betrayed by a disciple (such as Judas) there is much pain generated for the Master.

In this case Joseph betrayed some of the light he received and the flow between master and disciple was disturbed (a disturbance in the force) and Joseph experienced as great void of the spiritual life and feared he was doomed to some outer darkness.

The revelation told Joseph that he only had a small taste of what could happen if he did not keep his attention focused on the Spirit.

Jesus was telling him that he had already suffered the full intensity of the spiritual disturbance and if Joseph would listen to his voice such suffering would not be necessary for him.

The spiritual suffering of Jesus had four sources.

(1) The betrayal of Judas greatly disrupted the flow of Spiritual energy almost killing Jesus and rendering the three apostles (Peter, James ad John) unconscious. (2) After the angel saved his life by “strengthening him” he then had to face the dweller on the threshold for the entire world. Because he has faced and overcome the dweller he now has power to shield disciples from it. (See previous posts for more information) (3) As great as Jesus was he resisted the final direction of the Father and asked that he not drink of the cup, or complete his mission. This resistance increased his pain. (4) When the Christ, the Father within finished his mission with Jesus he withdrew his Spirit leading Jesus to exclaim – “my God, My God, why hast thou forsaken me.”

Because Jesus learned from this experience he was telling Joseph that his knowledge could lead Joseph and all who would listen to safe spiritual progress.

When I speak of these things I do not speak lightly, for I have also had this “taste” that is mentioned here and understand the principles of deliverance and the enormity of the spiritual pain if they are not followed.

Reader comment: I have the testimony of scores of prophets. I have the words of Christ.

JJ So do the Jehovah Witnesses and the Taliban. That doesn’t mean they understand them.

Let me remind you that if two people have soul contact on a point of doctrine they will see eye to eye. Whether you are right or wrong, however, you must follow the highest you know.

The sacrifice of Christ was not the physical man or the physical blood, but the Spirit of the Son of God which came into Jesus at his baptism.

Comment: The Atonement is called infinite because it MUST BE broad enough to cover not just a few transgressions, but those of all mankind.

JJ: This is not the meaning which should be obvious. The sin against the Holy Ghost is unpardonable as well as murder for a particular life.

It is called an infinite atonement because when one becomes at-one with the soul it is an infinite step from which there is no turning back.

Joseph was told that if he did not repent he would suffer even as Christ did. That would produce two infinities of suffering which is a mathematical impossibility. Even if it were possible why would Joseph or anyone else have to suffer the pain of billions of people as believers think happened with Jesus?

No one can read the scriptures with a black and white interpretation and understand them. All writings of great teachers can only be understood through the Holy Spirit and the principle of revelation.