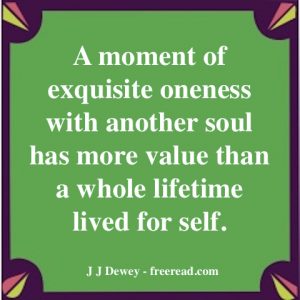 Blayne made some interesting comments that deserve attention. After noting the experience of the Apostles in re-creating the Molecule on the day of Pentecost he writes:

“I have experienced something like this and realized we were practicing something similar. Perhaps not the perfect form described here but never the less tapping into the power to some degree. In my Mormon days I used to get together with some fellow heretics and discuss all the things that were forbidden by the church 😉 After awhile a bond formed between us and we began to have prayer circles, we would make of list of things to pray for and pick someone to be the mouth and unite in a circle holding hands kneeling and go through the prayer. There was mostly males and a couple of females I don’t remember the exact number but I think there were four or five males and 2 females. After a few times they became so powerful that it seemed heaven and earth would shake and we would be as if engulfed in flames at times.”

JJ: Even though the ideal goal for us is a molecule of twenty-four people with twelve males and twelve females to create balance, a lot of spiritual power can be drawn down when three or more achieve soul contact together.

You had seven people, five males and two females. Seven is a powerful molecular number, one used in Shamballa. Since you did not have an equal balance of male/female energies, when you achieved soul contact together the spiritual energy adjusted to the male/female energies within each one of you creating a makeshift molecule of seven individual, rather than seven couples. The molecule of twelve units used by Jesus had to make this adaptation at times because of imperfection in numbers available at times as well as a lack of understanding with some disciples.

Your union of seven caused a geometric increase in spiritual energy. Now imagine what would have happened if you had a perfect balance of male-female energies – seven males and seven females?

Now imagine what would happen if there are twelve males and twelve females, the number of ultimate perfection.

Now, in addition to this imagine what would happen if there were a divine possession linking the molecule directly to the Christ and his Hierarchy of Light?

Blayne: Shortly after the power began to be manifest, resistance from unexpected quarters also began to manifest and soon there was a rift among two of the circle and then the power was gone when we tried it.

JJ: Negativity from unexpected quarters always comes out of the woodwork when an individual or group makes a step forward, especially a step like this. As soon as even one person gets out of harmony the spiritual power will be gone. The only solution is to send the negative one on his way and seek union with those who remain positive.

Blayne: Not long after that we quit praying and soon the group broke up completely.

JJ: This will usually happen with this type of group endeavor until at least three siftings are made. There is truth in the old adage “three is charm.”

Blayne: I realize now for a brief period we were functioning as a unit and of one mind and this led to the beginning of something greater then we as individuals were, but not fully understanding at the time what it was we were doing (we thought we were such spiritual giants) we lost it.

JJ: You were working with a giant of spiritual energy, but one of the keys is to see yourself as a humble part of the whole which I believe you realize.

Blayne: To this day though I long for that kind of power and bond among friends. I have maintained friendship with two of the group but we do not live in close proximity any more but we have a desire to do so and began again such a prayer circle. It gives me that tingling in the spine just thinking about it…

JJ: That is a great thing to long for. But when one does feel higher spiritual energies and continues to follow the highest he knows then to experience this and more will be the heart’s greatest desire.

On the other hand, if the pilgrim ceases to follow the highest he knows and his mind becomes darkened he will lose his memory of all higher spiritual experiences and will no longer follow the path to achieve them.

Blayne’s experience gives us an idea of the difficulty in establishing a permanent working human molecules. On the bright side is that when the first one or two are up and functioning that those who follow will have a much easier time in the creation process because not as much “faith” will be needed.

Part of my purpose in being here and teaching is to throw out a net with the aim of catching (drawing) disciples capable of overlooking personality effects and looking upon the soul of others so the many can become one. Progress is slowly being made but it will be a while before the first molecule is gathered in. We will take whatever time it takes. When the time is right, the group must be gathered together into one place so they can participate in close physical proximity to achieve oneness as Blayne sought to do.

“Until the foundation for the coming ‘jurisdiction’ is at least laid, the Christ cannot reappear; if He came without this due preparation, much time, effort and spiritual energy would be lost. Therefore, we must assume (if these premises are accepted) that there must be organised-in the near future-a group of men and women in every country who, under due and proper organisation, will ‘simultaneously and unanimously’ meditate upon those juridical measures and those basic laws upon which the rule of Christ will be founded and which are essentially the laws of the Kingdom of God, the fifth kingdom in the evolutionary and natural processes of planetary unfoldment.” Djwhal Khul, Discipleship in the New Age, Vol 2, Page 236-237

On a more frivolous note everyone is talking about the top ten movies this time of year and I have been thinking about this. Movies interest me because when you think of it each of us has a movie in us and creation itself is composed of a series of interesting stories. Therefore, from one point of view reflection on movies is metaphysical from a certain point of view.

I’ve looked over several top ten lists for the year and I must admit most movie critics have tastes much different from my own. I find the public seems to have a lot better sense as to what is the top ten than the critics. I usually find that the top ten money makers are close to what I would choose as the top ten movies whereas some of the choices of the critics make me wonder about their common sense.

Many are giving A Beautiful Mind their vote. We just saw it yesterday and it was OK, but it didn’t really press my entertainment buttons. Good acting by Russell Crowe

The Lord of the Rings is also getting good reviews and I would guess that I’m going to like this one, but I have not seen it yet.

Moulin Rouge is getting good press. I have this rented and will watch it soon, but have not seen it yet.

Overall I think fewer movies have impressed me this year than for some time.

Even though no movies I have seen this year made it to my all time favorite list here are some I liked.

The past couple Movies starring David Duchovny have been a disappointment so I wasn’t expecting much here, but I really enjoyed this show. It combined an original science fiction idea with humor that kept my attention through the movie. Good lite fun.

This was actually made in 2000, but I just saw it this year. I enjoyed the original characters and quirky humor.

This was perhaps the most criticized and bashed movie of the year, but the public voted for it with $200 Million in the U.S. alone. It wasn’t a great movie, but I enjoyed it and parts of it moved me.

Good story and acting based on real events.

Very creative, but the movie could never live up to expectations.

Frivolous, but entertaining and creative.

The worst movie of the year: Scary Movie 2.

This is the highest grossing movie of all time 601 million in the U.S. alone so far and there is a reason for it. The story was great and everything was flawlessly put together. This was one of the few movies that really affected me emotionally. The only thing I didn’t like was the lady throwing away the jewel in the end. What a waste, but even with this flaw I would rate it number one.

It is interesting that these two favorite movies of mine are made by the same person – James Cameron. This movie had perhaps the most original plot of all time. It makes your head spin to think about it. Reeses’s hero in his own time was his son (unknown to him) and sent him back in time to save his mother so he could be born. Reese goes back and becomes the father of John Connor the leader who sent him back in the first place. If John had not sent him back he would have never been.

I really liked Reese as a hero. He was a man with average ability who delivered a superhuman effort that seemed believable.

This was my favorite Star Wars movie and the only one to make my top ten. This movie introduced more metaphysical concepts that permeated public consciousness than perhaps any other and was a great story.

I’m counting these as one selection because they are so similar. This series had the most creative humor I have ever seen and even introduced a new cartoon character.

If you have not seen them yet rent then. You are in for a treat.

This story starring Christopher Reeve is one of the best love stories of all time. I have never talked to anyone who has see it who did not love it.

This was my second favorite comedy of all time and is one of few shows to showcase the comic genius of Gene Wilder.

This was one of the breakthrough movies of all time. Up until this movie there was no serious science fiction in movies. This showed the world that science fiction could be of interest to the general public if it was done right.

You can probably tell I like good science fiction.

This is one of the few older movies that really moved me. I saw it when I was a boy in the fifties. It was made in 1942 Staring Ronald Reagan, Bob Cummings, Ann Sheridan and Charles Colburn. I would like to see it again, but they never seem to rerun it.

So do you agree with my list or do you have another? Go ahead and let us know your favorites.