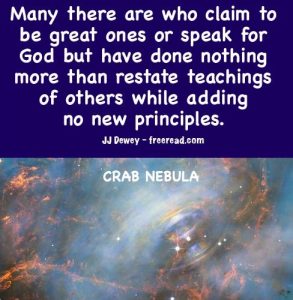 Djwhal Khul in his writings that ended in 1949 expressed high hopes for the spiritual evolution of humanity after the war. In expressing his vision for our future he ever reminded us of the fickleness of mankind and how unpredictable their progress may be because of free will.

Even taking into consideration our flaws he expected powerful results by 1975. He expected a release of the Shamballa force at that time which would lead to the teachings being given out to the masses “on a worldwide scale via the radio.”

Lucis Trust did their best to get a few things broadcast through the media, but all they could afford were a few local efforts – nothing of a worldwide scale. The Ancient Wisdom never even managed to come up with a national radio figure as potent as a Rush Limbaugh or even a Larry King. We have no one who is well known either nationally or internationally through the media.

If many of the principles of the Ancient Wisdom had been able to permeate society through the airwaves since 1975 it would have paved the way for his other hopes. He said:

In twenty-five years’ time enough work will have been done by groups such as yours so that the pattern of unity in the world will be distinctly seen. The theory will be comprehended and much straight application will be made. Unity will become a definite world goal in a sense different to the present one. The words “The souls of men are one” will be recognised doctrine of every world faith. So go on with the work of unifying, my brother—in rain or shine.

The problem before the Hierarchy at this time is so to direct and control all five of the powerful energies that the Divine Plan can materialise, and the close of this century see the Purpose of God for humanity assuming right direction and proportion

Externalization of the Hierarchy, Page 72

We are clearly told that he expected the teachings to be broadcast through the media, and great strides through seeing the divine plan materialize with unity becoming a definite world goal of the nations.

While it is true that there has been gradual step by step spread of new age teachings along with the Ancient Wisdom there has been nothing significant enough to cause the people of the world to contemplate the divine plan or seek world unity.

Instead, what we saw, right after the turn of the century, was the 9/11 disaster that initiated division in the country and the world to an unexpected degree.

When I was younger most people didn’t care which political party their friends belonged to and rarely did the subject come up. We all realized everyone had different political opinions and let it go at that.

Not so today. Today there is a great political division not seen since the American Civil War. In some circles one may be at physical risk if he lets people know for whom he voted. Instead of unity there is great anger and disgust from both sides with little desire to understand each other or to reason together and find points of agreement.

DK tells us that several avatars were supposed to show up before the turn of the century. Obviously something did not go as planned for the hoped for progress has not been made.

Now one may say that things are going as planned but we do not see it. Avatars have shown up and done their job but we are not aware.

Students must realize that a successful avatar will initiate. Let us look at three named by DK which are the Buddha, the Christ and Abraham Lincoln.

What they all have in common is that they all initiated things that helped humanity. Buddah and Christ initiated world religions and new teachings and Lincoln initiated the freeing of the slaves and solidified the union.

A successful avatar just doesn’t come and go with no one taking notice or making little effect.

If a disciple was able to initiate a radio program around 1975 that took the teachings worldwide then this would have correlated to the statement by DK that we could identify them by their works proclaiming them.

Since 1949 there have been no works by a spiritual teacher significant enough to “proclaim” their presence so a significant number of students can agree that an avatar is here and who he or she may be.

Something has gone wrong. What could it be? Is it that humanity has backslid to the extent that the avatars and high initiates have not been sent?

I do not think this is the case. I think they were sent as planned but the resistance and the problems encountered were much higher than expected.

Let us take one example:

“The Master Jesus will take a physical vehicle, and with certain of His chelas effect a re-spiritualisation of the Catholic churches, breaking down the barrier separating the Episcopal and Greek churches from the Roman. This may be looked for, should plans progress as hoped, about the year 1980.”

A Treatise on Cosmic Fire, Page 759

“From the chair of the Pope of Rome, the Master Jesus will attempt to swing that great branch of the religious beliefs of the world again into a position of spiritual power and away from its present authoritative and temporary political potency.”

Destiny of the Nations, Page 61

I believe this prophecy was attempted to be fulfilled by Pope John Paul I who was overshadowed by Jesus. He was Pope for a mere 33 days and was poisoned in Sept 1978 by those who fought his reforms.

The fact that He was in office 33 days which corresponds to the 33 years in the life of Jesus of Nazareth is far from the only correspondence.

His given name was Albino Luciani which means “white light.”

After John Paul I was killed he was replaced by Karol Joseph Wojtyla who became John Paul II. Ironically this replacement pope was born during a solar eclipse. This is symbolic of his reign during an eclipse of a true son of God through the death of Luciani.

The book, “In God’s Name,” written by David A. Yallop makes a convincing case that John Paul I was poisoned.

So, what happened to the others then?

The reason no great spiritual work has been initiated is because of human imperfection that has been skillfully manipulated by dark forces.

Then too we cannot overlook the fact that avatars and initiates are not perfect and often are not able to accomplish all their plans.

The story of Sampson teaches us this truth. The Bible tells us he was expected to be a Messiah to Israel, but succumbed to human weakness and didn’t fulfill his mission as expected.

The biggest problem is always with humanity itself and those who should know better are often the greatest hindrance. DK says:

“It is the disciples in the world and not the mass of men who today hinder the Coming of the Avatar and render useless His intention. He dare not come until the disciples and aspirants in the world bring about the needed changes in themselves, for the reason that there would not be ‘enough of the will-to-love with the fiery essence.’”

If one potential avatar falls down on the job another disciple can be chosen and overshadowed, but if students and humanity as a whole are not ready to accept additional light, even the hands of the Hierarchy will be tied.

So where have we as students and human beings failed and what can we do to fulfill our part?

Where we have failed is with the principle of evocation. For any great revelation, teaching or work to manifest among us there must be a powerful evocation. If the evocation is not strong enough then the messenger may be here among us, but unable to manifest the work he came to do.

What causes disciples to be lukewarm in their evocation of additional light?

The most common reason just laziness. They are happy with what they have and are not seeking more light or responsibility.

Another common one is they are caught in the glamour of anther disciple who may be no more enlightened than themselves.

For us to see the “greater works” promised by the Christ and to be of true assistance to the Hierarchy we must put our heart and soul into wanting such things to appear. We must use evocation with applied heart and will energies. To evoke, we must call out to God, our Source, and our souls for power to manifest through disciples so light and love and power can restore the plan on earth.

One of the things that DK anticipated was the appearance of the Avatar of Synthesis who would descend as far as the mental plane and then inspire certain disciples and groups.

I believe that this avatar has made an approach several times but there has not been enough power of evocation to sustain his presence.

I’ll thus end this post with an evocation for him:

From the center where the Will of God is known, let Purpose guide the little wills of men.

Let the One Great Life manifest Its Purpose and send forth his Avatar.

Let this Master of Purpose come forth and amplify our wills to synthesize them with his own, giving us power to serve.

Let the Avatar of Synthesis manifest to the group of which I am a part.

That we may prepare the earth for the Lords of Light and Love.

Let Will and Power and Purpose manifest the Christ on earth.

For Part 1 of this Series go HERE