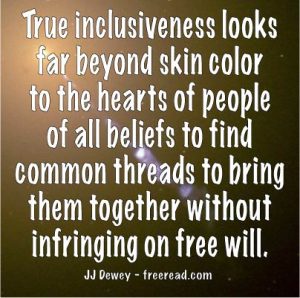 Peace is indeed the number one ideal embraced by alternative believers. It is an ideal supported by both the mentally and emotionally polarized, by the sixth ray people going out of influence and the seventh ray coming in. The main difference between the two is in the approach, not the desired end result of peace and goodwill.

In addition to peace there are a number of other ideals that are too firmly embraced with the sixth ray attitude of a black and white approach leading to extremism. What is overlooked is every virtue must be applied with good judgment else it will turn into a vice.

For instance, we all realize that generosity is a good quality, but if a parent gives away all the family’s grocery money to a good cause he will be doing harm to his children who may go hungry. Good sense is always the bottom line for anyone seeking to become a master of wisdom.

So let us look at some other ideals endorsed by those in alternative spirituality.

Inclusiveness would be high on the list. They teach that a lack of inclusiveness pervades Christianity for many believe that only members of their church or belief system will be saved and some are accused of favoring the rich or a certain class of people. Most alternative folks feel they are free from this fault and see themselves as having a loving open door welcoming all into the fold. Many have also stepped into the political arena and have advocated welcoming all across the borders, legal or not. Many want no screening process at all to filter out criminals.

Indeed it is a virtue to be inclusive if applied with common sense, but like all virtues, if taken to the extreme, it becomes negative rather than positive.

Let us use the Law of Correspondences and relate open borders to a family home. For U.S. citizens the United States is our larger home, but in the microcosm the property we live in is our home also.

Now you may have a relative or friend call now and then asking if they can crash a few days. It may be an inconvenience but you accept them and figure you are being inclusive.

Now suppose an old acquaintance who you never considered a close friend shows up on your doorstep with a wife, six kids and three large dogs. Taking him in may indeed test your normally inclusive nature.

If one really wanted to be inclusive he could take in a few homeless people. The trouble is that even if one was willing he would be nervous about doing it since the homeless guy could be on drugs and dangerous.

But let us suppose that Billy Bob is one righteous dude and decides to open his home and resources to those in need. He invites three homeless people to stay with him. He is fortunate in that he chose three that were not dangerous, but he finds they do take much more advantage of his good nature than he planned. His favorite food and drink disappear very quickly.

Then a couple days later word spreads about his good nature and three more homeless show up on his doorstep with very sad stories. Billy Bob reluctantly lets them in, thinking it is good to be inclusive.

Several days later, after having his house trashed, three more show up. He is determined to be inclusive and again lets them in. Then it becomes a daily occurrence for more to show up until his house is overflowing with all kinds of strange individuals who were more concerned with getting than giving. Finally, after sustaining more grief and expense than he could handle he throws his arms up and orders all of then to leave. Several become angry and threaten him and say they are staying no matter what. Billy Bob is beside himself and decides the only thing he can do is move out and let the bunch fend for themselves.

He gets a room at the Motel 6 and waits. Within a month the home has suffered so much destruction and abuse that it was not even fit for the homeless to live in. The bunch then leaves the house and moves into a shelter that at least has running water and some food.

He seemed to be.

Should our nation take the Billy Bob approach to our borders?

Obviously if we do not operate with some limitations too many people in need entering the country could wind up creating much damage as happened to Billy Bob.

Did Billy Bob practice the principle of inclusion and does our country if it uses no judgment as to who may enter?

So are some true believers being extreme and advocating the Billy Bob approach to inclusiveness and open borders?

Part of the reason for this is that various teachers have rightfully taught of a time in the future where we will have open borders, throughout the world. Unfortunately, believers see such teachings in terms of black and white that need to be applied right now with no judgment involved.

In our story Billy Bob had a problem because of the great inequality between him and those he tried to include. That created a situation where he needed to use common sense in applying his inclusiveness, else more harm than good would result. If he lived in a city where all had a place to live then his inclusiveness would not create such a problem.

We see this working out with the borders of the United States. Because of the great inequality of the people south of our border we have the problem of millions crossing the border illegally.

On the other hand, because there are fairly comparable standards of living between Canada and the USA we do not have the same problem with them. We can be as inclusive as we want with Canadians with no negative results.

The solution with Mexico is to assist them in obtaining an efficient government and productive society so their standard of living will increase.

When Mexicans can earn as much in Mexico as they do in the United States then the problem will be solved and open borders will be no problem. In that case we would probably have as many U.S. citizens going south as Mexicans coming north.

The key to wisdom here is that as much as we want to be inclusive, generous and helpful all must be done with the application of thought. Without this the person may wind up doing more harm than good. If we do more harm than good, even with good intentions, we will create negative karma.

Jesus was an inclusive guy, but even he acknowledged limits in his parable of the wise virgins.

The five wise virgins saved up oil for their lamps so they could have sufficient to meet the bridegroom. The five foolish did not. When the call came the five wise lighted their lamps and proceeded, and the five foolish asked to borrow some of their oil. They replied that if they shared then none of them would have enough for the journey to meet the bridegroom. They thus refused and went on their way.

Even so, if our country shares too much and is too inclusive we face the danger that Billy Bob did with his house. Everyone could loose.

The strong can help the weak, but if the strong become weak then there will be no one to help.

At present, instead of violating the principle of the incoming seventh ray with lawlessness, we need to go by the laws that are on the books and if they are seen to be unjust we need to change them. Inclusiveness and lawlessness are a dangerous mixture.