and the Mahatma Letters, Part 3

The evidence so far indicates that HPB wrote the letters attributed to KH. Assuming this is true some of the differences in the look of the two handwritings could be explained merely by the fact that she wrote at a slower pace in order to make the script more readable. It also had the effect of creating a slightly different look than her normal handwriting giving some credibility to the idea that the handwriting of the letters did not belong to her.

A slowing down of the speed of handwriting may produce a less pronounced slant, larger middle zone and add or take away a few idiosyncrasies. The two writings do differ some in these respects.

What makes an analysis extra complicated here is that HPB was not consistent in her letter formations. She used different letter formations for the letters y, g, f, capital I, w, d, p and others. This shows she had a very versatile mind and it allows her defenders to point out examples of certain letters in the two handwritings that are different. For instance the f in the word “of” looks quite different here. Two KH samples are in the left and HPB on the right.

They overlook the fact that HPB was all over the map in letter formation and the KH samples had quite a bit of variety also.

Here are samples of the word “of” that are quite similar. Again KH is on the left with HPB on the right

Then too HPB did make some looped fs as noted below:

This same argument was made concerning the small letter p. KH seems to have a different formation than HPB, but if you look over all the samples you can find examples of similarities here also with the differences explained away by the writer using different writing speeds and attempting to produce some differences.

If a writer tries to make his handwriting look like that of another he may create a handful of differences, but there are too many ingredients in handwriting to cover all his tracks. We’ve already covered a number of fairly striking anomalies that are similar. Now let us compare some standard features. Links to samples of writing from HPB and the Mahatma letters are in the first part of this treatise.

(1) The Slant The slant of a writer may range from a backhand to being far forward. The general slant of both writers is moderately forward. This is quite common with about one out of three writers in this category. There are subtle ingredients in the slant we could go into but we want to keep this simple.

(2) The Middle Zone The upper zone are strokes like the small letter L that ascent above most letters. The lower zone are those such as the small G and Y that go below the baseline. Small letters such as he a, c, e, m are all in the middle zone. The middle zones are similar with that if KH being a little larger – which could be expected from a change in writing speed.

(3) The Lower Zone Similar though HPB did have considerable variety in the length of some of her lower zone letters.

(5) Margins Both have small margins on the left and particularly the right with words going downward from the baseline when reaching the end of the page. This is unusual and in both handwritings.

(6) Spacing between words and lines Similar

(8) Hooks at the beginning of strokes Found in both writings.

(10) Break-away Strokes These are strokes that break away to the right instead of returning normally. These are in both writings. See samples below. HPB on the top and KH on the bottom.

(12) The T Crosses The T crosses in both writings are placed on the average higher than normal and are longer and heavier than average.

(13) The Capital I In both the acknowledged handwriting of HPB and the KH letters there is a wide variety of formations of the letter I, most of them somewhat conventional looking and somewhat similar, but in one sample I have HPB breaks away and makes a very unorthodox I. It is interesting that the writer of the KH letters does the same thing. The HPB sample is on the left and KH on the right.

(14) Signatures It is interesting to compare the signatures of HPB and KH. Below is a signature of HPB taken from the cover of the Secret Doctrine and below that is KH signing as Koot’ Hoomi Lal Sing. 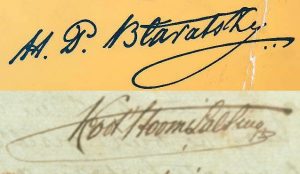 There are three significant similarities.

(2) The lines creating the loops both get stronger as they go ending with very heavy pressure.

(3) Both of them have extra and unnecessary dots added.

That should be enough to confirm that the evidence is very strong that HPB wrote the Mahatma letters and not just part of them but all of them for which I have samples.

It is true that one can find a few letter formations that are different the HPB writing and KH, but you can also find differences between the early and later KH handwriting within the Mahatma letters themselves. The degree of similarities are very strong in all the samples and it is my conclusion that they are all written by the same person – Madam H. P. Blavatsky.

So, does this mean that I think we should disregard HPB’s life and writings? No. That is not my thinking at all. We’ll assess HPB and her possible motives work in the final section next.