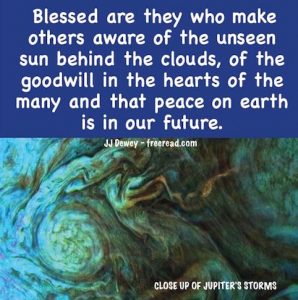 Many spiritual teachers are against the idea of Hierarchy. Some go so far as to say that it is a human and evil creation and does not exist among the higher lives.

DK, on the other hand, gives out a firm teaching on the importance of hierarchy among all lives. He says:

“the fact of the great “chain of hierarchies” stretching all the way up from the mineral kingdom through the human and the kingdom of God to apparently remote spiritual groups, will be emphasised.” Externalization of the Hierarchy, Page 417

“The theme of the living consciousness of the planetary Logos is forever and unchangeably the great Hierarchy of Being, that chain of life in which the smallest link is of importance, and the greatest link is related to the smallest through the electrical interplay of spiritual energy. There is naught—from one important angle of life—but Hierarchy, linking sun with sun, star with star, solar system with solar system, planet with planet and all planetary lives with each other.” Rays and Initiations, Page 737

Then he relates this interesting problem:

“This hierarchical structure is a basic and eternal reality, but the concept has been so distorted and so misused that it has evoked a revolt in humanity and has produced an almost abnormal reaction to a freedom and a license which are assuming undesirable dimensions.” Education in the New Age, Page 105

Why do you suppose people revolt against the concept of Hierarchy and what can be said to set their thinking on a correct course?

DK tells us that that hierarchy exists from the mineral kingdom, to the human, to the kingdom of God and beyond. Mere observation pretty much confirms that where there is intelligent order there exists hierarchy, yet many reject the idea. Many idealists believe that in a future perfect world, or afterlife, there will be no hierarchy. On the contrary, evidence does not bear this out as one cannot find any functioning intelligent organization without some type of hierarchy.

The question that one may ask here is why do many reject the idea of hierarchy?

The answer is that they associate it with strong unjust authority. Yes, it is true that there are many hierarchies who apply too much authority, force and control, but like all things in this reality of dualism there are positive and negative hierarchies. Just like both the good guys and the bad ones have to breath air, both sides must have some type of organization in order to get anything done.

Question: What is the difference between a positive hierarchy and a negative one? There are a number of them so feel free to name more than one.