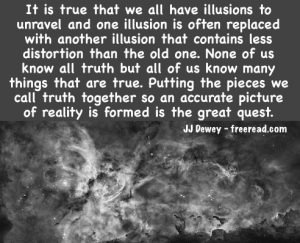 “God has not created illusion. We did with our rational mind. Illusion is not but a thought, a wrong thought in the human mind.

Let us examine the first statement:

“God has not created illusion. We did with our rational mind. Illusion is not but a thought, a wrong thought in the human mind.”

Question: Who created our minds?

Question: Are we one with God in the true reality?

Question: Therefore who created the illusion?

Reader: “There is not but God in the universe.”

Therefore, even the illusion which is real to us (who are also one with God and creators with God) would have to be part of the creation and plan of God.

If all things are created by God then the illusion also is his creation and responsibility no matter what anyone has written to the contrary.

Besides, I thought that you teach that there is no right or wrong, thus there can be no “wrong” interpretation. If we are all correct why attempt to set us straight???

JJ: Since everything began with God in oneness then the duality had to spring from God in His oneness. To say that duality was created by something apart from God is to say that there is something else out there that is not God doing some creating. This of course cannot be true for all things come from God even duality, especially duality.

JJ: So are you saying that God is not omnipresent but exists in some location apart and separate from manifestation?

Reader: There is no right or wrong in oneness. In separate duality such as our experiences however there is the belief in right or wrong.

JJ: This does not answer my question. My question to you is why do you take positions almost daily on the rightness or wrongness of comments of people in this group when you claim to follow this oneness idea, or do you feel that you have not reached it yet yourself?

Also you did not answer my other question which was:

Let me rephrase it:

Something obviously made or created duality which includes this world and universe in which we find ourselves. You say God did not do it. If God did not do it then something that was not even created by God did it. Who made this “thing” out there that’s running around creating everything playing tricks on us? Now you can’t say it is our minds. But because we, including our minds, are part of God’s creation, this still makes God responsible for it all.

Reader: As duality is from oneness everything that is dual is ultimately from oneness. However illusion, as lack of truth, can only come from duality and not from oneness as the source of all.

JJ: Your second statement here contradicts the first. If duality comes from oneness and illusion from duality then illusion owes its being to the oneness that created duality.

Maybe it is illusion but I have great difficulty in getting a direct answer from you to my questions. Let me repeat my question again:

“My question to you is why do you take positions almost daily on the rightness or wrongness of comments of people on this list when you claim to follow this oneness idea, or do you feel that you have not reached it yet yourself?”

Your non answer was:

“I merely talk about ideas and engage in metaphysical discussions. I have never critically commented on the rightness or wrongness of people’s positions. I have never launched personal attacks or passed negative remarks and I have never talked about what I have achieved.”

JJ: No one is saying you have been critical and I do not think that I have been critical in return. No one has said that you have launched personal attacks and I also hope you have not seen my comments as such. BUT you have taken positions almost daily on the rightness or wrongness of comments of people on this list. This type of judgment of right and wrong is in harmony with my philosophy, but from what you have said it seems to be out of harmony with your own. How do you justify this type of judgment when you seem to teach against it??? From what you have said it would seem to interfere with your focus away from duality.

Reader: “Your reasoning logically leads to the conclusion that since good and evil come from the oneness of God, evil has to directly come from God.”

JJ: All things come from God, including both sides of the duality including evil. I know you’re not big on authority; nevertheless I will quote the Bible which has meaning for some:

“I form the light, and create darkness: I make peace, and create evil: I the LORD do all these things.” Isaiah 45:7

Thus we see that even the great prophet Isaiah taught that God created evil.

Like I say, if God did not create evil then we have some other being that is not God who is responsible for much (or all) of the creation we see.

Reader: This is simply negating the concept of duality. God and his manifestation are the

primeval duality. From this duality come all dualities of manifested forms. It is essentially correct to say all is God but with some qualification. To say that God, the source of all, acts to create evil or illusion without participation by humans, as is the case, is not speaking with precision and clarity.

JJ: But humans are the “image of God,” or the reflections of God. Jesus point blank stated that we are Gods (See John 10:34). Therefore, whatever we create is a creation for which God is responsible for man and God are one. We are his hands.

Here is my thought on this duality debate. I believe the principle behind it all is illustrated quite accurately in my first chapter of the Molecular Relationship. In the beginning (of this universe) God was a singularity (oneness) which projected Purpose in all directions since there were no directions. Purpose vibrated and created the wavelength. The wavelength in turn created all there is which is evidenced by the explorations of science. Within matter they can find nothing solid, but only smaller and smaller wavelengths. Even a quark is made from them.

In this world we see all things as separate and distinct, but in the higher worlds they are one as the body is one, but with many parts. Within our bodies is one spirit of life and that life is omnipresent throughout the body. Nevertheless the body has many parts. Even though the eye is separate and distinct from one angle, it still shares the same life as does the hand. Therefore when one of my eyes sees correctly it does not see itself as a mere eye, but as the whole. In my case the eye that sees itself as one with my body would not say “I am an eye,” but would say “I am JJ” and I use my uniqueness to see for him which is myself.

When we shift from the angle of vision of seeing ourselves as a separate universe (as Philo in my book) to that of seeing the connectedness and oneness of all life then higher revelation does become possible.

I know that some have probably questioned the wisdom of my spending so much time on this topic, but it seems to come up again and again. Because of this I hope to elucidate it clearly enough now so we can have greater unity and focus in the future.

1 thought on “God and Illusion”