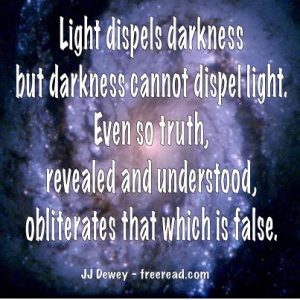 A complaint I have received from readers is that me and several others are forcing our teachings upon others. This criticism indeed has an illusionary but interesting foundation. Why do I use the word illusionary? Because no force is involved. The big question is why do some feel that the making of concrete statements believed to be true is force? Let’s talk about this a moment.

Is it even possible to force your belief system upon others? The Communist Chinese and North Koreans tried it during the Korean War. These mislead souls and others who have no honor for the free will of humankind have discovered that when most souls go through enough pain, deprivation or repetitive programming they can be made to say they believe most anything; but then take them out of that situation and put them back into normal living and they will usually revert to their former beliefs. Thus even a direct forcing does not change inner foundation beliefs.

Many totalitarian regimes try to force their beliefs on their people by filtering the information they receive. The newspapers and media are only allowed to report certain types of information in certain ways. This is perhaps the most successful method of all because the opinions of the people are formed with only part of the information available. Even in this country (USA) this is somewhat of a problem. Our media does not generally cover up, but they will put much greater attention on one story than another, just because it goes along with their belief system. This causes people who only form their opinions as a reflection of general information and catch phrases to be very deluded.

Nevertheless, in all circumstances there are always a certain number who see through the illusions. During communism in Russia there was a large number of people who knew that the headline on the front page of the newspaper Pravada was not the important news. The important news was always hidden in small print on the back page. This was what the intelligent Russian read first and drew his greatest attention. Even in our “free” country the most important news is often on the third or fourth page, or maybe in a letter to the editor.

We often forget the person who is responsible for the discovery of truth: it is ourselves. When we realize this and take responsibility and do not give it to another we will see through the hype and illusion and recognize it for what it is.

As I reflect on the various times in my life when I have heard the comment that I am forcing my version of truth on others I see a common thread. The closer I am to a truth that a listener does not want to accept the more he feels forced.

The reason is that truth itself is the greatest and strongest force in the world. If one is in a comfortable illusion he does not want to see truth. If the truth is presented in the light the person feels great force because that which is seen in light is undeniable.

This is the reason that many workers in the light throughout history have often been persecuted or burned at the stake. They present the truth in the light. The illusion begins to dispel. Those in the illusion do not want the fog lifted so they do all in their power to eliminate the messengers of light. If the bringer of light is removed then the illusionary fog remains.

Truth is thus a greater force upon the human psyche than any totalitarian regime could ever hope to be.

Suppose that your kindly and beloved grandfather taught you that two plus two equals five. Because you loved and revered him so much, you accepted this data without question. In fact, because of your respect for him you thought it was wrong to even doubt him. Other people made fun of you for this belief but that did not matter. Your respect for your grandfather was greater than fear of criticism. Then a friend comes along who has no desire to make fun of you, but feels it is time you added this important truth to your life.

Here is how the dialog goes:

Friend: Come here. I want to show you something.

Deluded Person: What is that?

F: Now I am taking two of those apples and moving them to the other side of the table. Am I correct in saying I have moved two apples?

F: Now I am taking two more apples and grouping these with the other two. Did you witness me moving two sets of two apples?

DP glances at the four apples and gets a terrible feeling in the pit of his stomach as truth stares him in the face. It is impossible that his kindly grandfather could have mislead him, yet there seems to be four apples before him and the fifth is on the other side of the table.

“This is a stupid trick” he shouts as he turns the table upside down. “Take your bag of tricks and get out of my house and never darken my door again!!!”

The man feels very angry. This trickster has tried to force his version of truth upon him and has insulted his beloved grandfather. How dare him!

This is not the end of the matter, however. The deluded man cannot escape or erase from his mind the image of the two apples plus the two apples equaling four apples. He keeps trying to put it on a shelf or erase it completely, but it comes back to haunt him with much greater force than Chinese brainwashing.

As this image looms before him he is faced with a choice: either accept the truth as it was revealed in the light of day or pretend that the truth does not exist. If he eventually accepts the truth he will accept the messenger back as his friend. If he knowingly rejects the truth he will see the messenger as an enemy and try to either discredit or destroy him. He will oppose any type of debate or free thought on the subject and shift his attention to an illusion that makes him feel comfortable.

Now the problem with spiritual, philosophical or political truth is that the proving of it is more complicated than two plus two equals four, yet the principle that reveals it is very much the same.

Undistorted facts put together in a logical way will lead to the greater reality of four which, if gazed upon by the soul, will be undeniably true.

The trouble is that few people are able to look with vision upon the greater reality because their present illusion is comfortable and they do not wish to have it destroyed.

All kinds of excuses are made for not looking at the truth. Here are some of them:

One person’s version of truth is just as good as another’s.

That is your truth, it’s just not mine.

I do not wish to listen to your babble.

And then, of course, there is: “You are trying to force your version of truth upon me.”

If you feel forced by another’s viewpoint it is probably because there is some truth in it trying to force its way out.

Let me end this with one of my favorite quotes from A Course in Miracles: “The truth is true and nothing else is true.” Two plus two equals four and does not equal any other number in the universe. There is a point of truth that is always true and can be recognized by all who tune into the universal soul. I commit myself without apology to do my best to present the highest reality possible to those who use their free will to see things as they are.