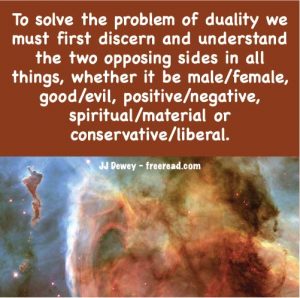 In my Facebook wanderings I came across this question:

“People keep saying that “like attracts like,” and even calling it “scientific.” In science, generally, it appears opposites attract seeking neutrality. Magnets. Electrons and protons. Etc.

“Someone mind explaining this principle or how the two seemingly incongruent ideas actually do fit together?”

Actually opposites do not attract in science, but the forces created by opposing poles do seek balance just as happens among us humans.

Let us look at opposites in science. The foundation of physical creation is the atom. The atom consists of positively charged protons and neutral neutrons at the center. Around this nucleus circles negatively charged electrons. Here we see that like gathers to like for an atom with many protons will have them all gathered together at the center with the electrons keeping a far distance away.

That distance is very significant. If the proton in the center of a hydrogen atom were the size of a soccer ball the electron would be a small pebble over four miles away. One can certainly make the case that the negative particle is keeping its distance from the positive.

Now in the creation of molecules you have atoms seeking balance and bonding with each other to balance off their excess charge. This follows the principle that nature abhors a vacuum more than opposites attract.

In creation there exists matter with two different charges. If we consider our matter as positive then anti matter would be negative. If they come into contact with each other they will destroy each other and return to pure energy.

Scientists consider it a flip of the coin that this universe wound up being created of positive matter. It could have just as well be formed of anti matter, but it had to be one or the other because they cannot exist side by side.

What seems to be a contradiction is the magnet. The positive pole of a magnet is attracted to the negative of a second magnet.

What is overlooked is the poles in the magnet itself. In a bar magnet you will have the negative pole on one end and the positive on the other. This would not be the case if they were attracted to each other. If the positive was attracted to the negative then the forces would merge in the center. Instead, the polarities are at the two ends because they repel each other.

The same principle is at work with the magnetic poles of the planet. One is near the North Pole and the other near the South Pole. If the negative and positive were attracted to each other they would be merging at the center of the planet and not be at opposite ends.

The reason the positive pole of a magnet is attracted to the negative pole of another magnet has more to do with balancing forces than opposites attracting. This appears like an exception to the rule but it is not.

In nature then like attracts like, but there is a weaker attraction to the opposites. The proton is willing to live side by side with another proton, but it also seeks an association with its opposite, the electron. However it keeps its distance from its opposite so balance can occur.

Human roughly follow the same patterns as nature. Like attracts like. Those with similar beliefs and interests like to gather together. Often a lack a similarity brings great opposition as is now happening between Democrats and Republicans. However we don’t mind the existence of opposition, but we like to keep our distance from them.

Like two magnets men and women, who seem to be opposites, like to join together, but they are more like atoms seeking balance than protons and electrons. We both have male and female energies within us and the males with an excess of positive seek to unite with a female who uses that excess for balance and supplies her own excess of the other energy to balance the male. Among gays one will play the female role and the other the male.

Overall the correspondence between humans and nature is an amazing thing to examine.