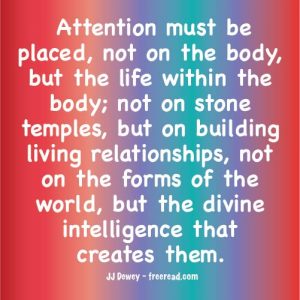 Question: Is our spiritual path related to the direction of the motion of the chakras?

The two paths, the line of least and most resistance has more to do with making ourselves in alignment with higher Decision/Will/Purpose than it does with the flow of energies in connection with the physical and etheric body.

For instance, when you tread the Path your blood does not reverse direction and neither do you sleep standing up. But then a great reversal does happen. Suddenly you see everything from a different angle than does the majority and you see that the decisions that you must make and follow through to completion are just the opposite that most would make in your same circumstances.

Question: Would not the opposite of light be dark?

Actually dark appears to be the opposite of Light, but because of distortions in this physical world dark is not a true opposite.

For instance, you can shine a light and dispel darkness, but you cannot project “dark” and dispel light.

You can dispel hate with love, but you cannot eliminate love through hate.

Light is that which reveals (or that which is visible) and dark is that which hides. Reality can exist in light or dark in the seen or unseen. Light in its highest essence is the radiation which is seen whereas its true opposite Love is not visible, but lies hid in the esoteric dark of life. Only by descending into the darkest depths can the fullness of love become known

Note what was written of Christ:

“(Now that he ascended, what is it but that he also descended first into the lower parts of the earth? He that descended is the same also that ascended up far above all heavens, that he might fill all things.)” Eph 4:9-10

Christ had to descend below all things so he could rise above all things and manifest the invisible love of God to us.

All these polarities are opposites in the general sense of the word. All these opposites work in partnership with the divine midway point. Without opposition there is no creation, nothing “to act or to be acted upon.”

Opposites in cooperation produce creation and take us toward the dominating good.

Example: Male and female in cooperation create new life – a child – a product of light and love to fulfill divine purpose.

I thought I would make a couple points of clarification. First the human correspondence of an atom is represented by a male and female coming together and balancing their energies. As these two become “one flesh” they are looked upon as one human atomic unit or a human Adam.

The higher correspondence of an atomic molecule is represented by specific numbers of male/female units uniting in purpose and linked spiritually to the Kingdom of God.

Past prophets may have had a glimpse of this relationship and thought that the various molecules in the multiple relationships would mean that polygamous and other unusual relationships would be he way to go. But the truth is that male/female entities as individuals form human atoms, not molecules and this requires a one to one relationship, just as there is always one proton for each electron in nature.

But once the male/female relationship is in balance then higher non sexual sharings on a spiritual level can create the next great step in our human evolution.

Incorrect sharing of sexual energy (often in place of the spiritual) is the cause of the downfall of more spiritual groups than any other principle.

As far as what is right and wrong in sex goes neither the churches nor the free spirits have this down correctly.

Before we proceed it is important to point out that there is room for all in the Kingdom of God, male/female, married/single, gay and straight. No matter what situation we have found ourselves in through birth we all have the same opportunity for progress, but we all must also learn and apply the same spiritual principles to obtain certain results.

Let us stop a moment and examine the two words – Molecular Relationship.”.

A key point to remember is that even though the atomic lives are much closer to the end of their evolution than is humankind that humans are a more complex life form than molecules, cells and atoms. What this means is that even though we have not duplicated the perfection and intelligence of the microcosmic world at the present this does not mean our achievement is low. Humans have only really began to organize. The day will soon come (relatively speaking) that we will not only reach the level of intelligent organization of the micro world, but because we are a higher life form we will far surpass the complexity and glory of the lower lives when humanity reaches its fullness in evolution.

An important key to realize is that all creation is composed of relationships. Without relationship there would be no form, no creation, no intelligence, no love and no universe.

Some seekers have made the claim that they have evolved beyond relationship – that they need no one else besides themselves, but such is illusion. Even the Course in Miracles teaches that God himself needs us in relationship and if God should need us for relationship then surely we need God and each other.

Whether we want to admit it or not all of us are deeply involved in relationship. Here are a few examples.

(1) We owe our vary existence to the intimate relationships of the tiny lives out of which we are composed.

(2) The mind has relationship with the heart

(3) The heart and mind have relationship with the desire nature.

(4) The desire nature has relationship with the sexual nature.

(5) We as individuals have relationship with our parents

(6) We have relationship with our immediate family and relatives.

(7) We have relationship with our friends.

(8) We have relationship with our fellow workers and perhaps customers.

(9) We have romantic (non committed) relationships.

(10) Some have married relationships

(11) All have student teacher relationships of some kind.

(12) Many have spiritual relationships with other people.

(13) Then there are those who have relationship with the Spirit through the Soul.

(14) Eventually we will have levels of higher relationship never before experienced which we call the Molecular Relationship.

Now if one really wishes to escape relationship he must eliminate all fourteen of these items and more from life (perhaps we would call it a non life if such a one was successful).

When we hear one who proclaims that he needs no one and is complete within himself and is now free from relationship what is he really saying?

Often (but not always) he is really expressing a fear of intimacy. In the past, closeness and trust has caused him pain and because of this pain the person now wishes to avoid close relationship thinking this will avoid pain.

Do we really avoid pain by avoiding intimacy?

Does the person who avoids intimacy encounter unexpected pain?

What would that be?

Is intimacy something to be desired? If so how close are we to become?