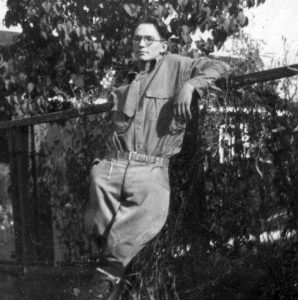 The following story, I dedicate to my kids. It will be a brief history of my past life. As I will be writing from memory only, It will be impossible to remember all the correct dates. Also, the events in the order of which they happened. Most of this happened a long time ago. I will just try and cover the high-lights. So if I leave out something that you think should be there, please forgive me.

I know that writing this will bring back a lot of memories. Most of them good, some them sad. What inspired me to write this was a telephone message I received from my daughter Sandra a few days ago. She asked me to write the story of my life. So here at Prescot Arizona, on the fifth day of July 1982, I begin this story. Without any notes I will start back as far as I can remember and just cover the high spots. I will not go back and edit it or look for miss-spelled words. Which there will probably be a good many. If you would like to correct them, go ahead. So now I will begin…

Just finished the story this morning. At least for now. Hope all of you enjoy it.

It was a cold winter day that January 5th, 1910, when my mother gave birth to me at Grandpa and Grandma’s place in Emmett, Idaho. Of course this I don’t remember. But my dear mother told me about it many times.

I was about two years old when Dad and Mother took up a one hundred and sixty acre homestead in the desert between Caldwell and New Plymouth. They built a one room shack on it and stayed there for two years. When we moved on to this place covered with nothing but sage brush, there was just three of us kids and one on the way. Brother Cecil was the oldest. About two and a half years younger was sister Afton. Then come myself and brother Ray was in the making. Later would come Del, Jennie and Bob.

During those years that we stayed there, a couple of events are still vivid in my mind. Even though I was only three or four years old, I will tell about them. The first one first.

We had gone to Emmett to visit Grandpa and Grandma. It was early in the spring of the year and still quite cold. Dad and Mother was riding up in the high seat of the big freight wagon. Us kids were in the back. We were almost home. It had been raining and most of the snow had melted. Up just ahead of us was a large, shallow pond of water. Dad yelled whoa to the horses and stopped the wagon. Everyone was on their feet. There was no way around. We would ford the water, then go on.

Then suddenly, just across the pond, appeared a big Coyote. He just stood there looking at us. Dad responded quickly. The twenty two rifle, which he always took along, was in his hands. Then the report of gun… The bullet missed, but the Coyote just stood there.

It was a Winchester pump action rifle. He attempted to throw another shell into the barrel, but the gun jammed. The fired shell was stuck in the chamber. Dad swore. That Coyote pelt was worth money. Once more he tried and failed. Then the Coyote laughed. Did you ever hear a Coyote laugh? Well, this one did. This was too much for Dad. He jumped into the seat, swung the gun around his head a few times, then hurled it at the laughing Coyote. It landed out in the middle of the pond with a big splash. The Coyote chuckled once more and went on his way. Dad was a very angry man as he waded out into that little lake to retrieve his rifle.

There was one more incident that I will never forget. Brother Cecil was eight or nine years old. There were lots of badger holes around and in some of them were real live badgers. Dad had several steel traps; he decided to catch some of them. I went along and watched.

Cecil had learned from Dad and I would learn from him. When we would come to a fresh badger hole, he would set the trap and slide it down into the hole. He would then wire the trap

chain to the nearest sage brush, then go on looking for another hole.

After watching him set several of the traps, I decided to set some of my own. I couldn’t press down the springs of these that he was using. I would just have to figure out something else. And I did. Now don’t laugh. After all, I was only three or four years old. I went back to the house and found what I thought would get the job done. A half dozen old mason fruit jar rubbers. Also a ball of twine and an old pair of scissors. When I would come to a fresh badger hole, I would tie one end of the string around the rubber and push it down the hole. Then I would cut it off and tie it to the nearest sage brush. I didn’t catch any badgers but I had a lot of fun trying. Just last summer, brother Cecil and I were talking about old times. I told him about these two experiences as I remembered them. He listened, then slowly nodded his head. His only remark was, “Well I’ll be damned.”

Here are links to Ted’s other books which are free online:
They Always Smile
Beyond the Bend in the River
Just A Little Bit Crazy