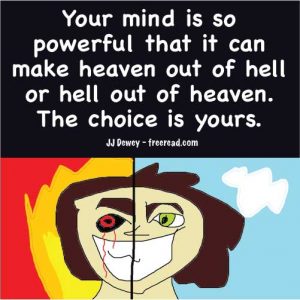 For some time now we have heard talk about the void, a point of nothingness as if this is a desirable place to go or be. This idea has always ran against my grain and I wondered to myself if such a concept was talked about in the scriptures and sure enough it was:

“The beast that thou sawest was, and is not; and shall ascend out of the bottomless pit, and go into perdition: and they that dwell on the earth shall wonder, whose names were not written in the book of life from the foundation of the world, when they behold the beast that was, and is not, and yet is.” Rev 17:8

Here it is! The illusionary Beast that destroys the souls of mankind comes from the void or the “bottomless pit.” The description of his origin sounds a lot like the description of the void we have been getting. It “was, and is not, and yet is.”

Have we not heard this argument in relation to ourselves and the reality we are in? “We seem real, but we are not really here, but then in an illusionary way we are here.”

Now there is a big difference between the origin of the Beast and you and me. The Beast truly has no real existence, but is created by an astral thought form and sustained by fear which is also a temporary emotion. As soon as the fear is dissipated the beast will return to the “bottomless pit” and then it will be as if he never existed.

The essence of a human being, however, never had a beginning and when we die we do not go to a void and become as though we are not, but we go to a real place which is the opposite of a void.

There is a powerful law which says that “energy follows thought” and thus if we belief and think that we can go to such a void, the power of the God within will create an illusion of a void that will slow progression to zero until the person tires of the attempt to be no-thing.

The scriptures indeed tell us that this void is about as close to hell as one can get to:

“And he (the angel) laid hold on the dragon, that old serpent, which is the Devil, and Satan, and bound him a thousand years,

“And cast him into the bottomless pit, and shut him up, and set a seal upon him, that he should deceive the nations no more, till the thousand years should be fulfilled: and after that he must be loosed a little season.” Rev 20:2-3

The writings of Alice A. Bailey are in harmony with the scriptures on this. DK says that a void is created within when the soul is rejected again and again through full attention on self rather than the higher realities of soul and Spirit. When attention is focused on this illusionary point to the exclusion of the soul then an illusionary vehicle is created out of mental matter that is beyond the reach of soul. When this happens in completeness the person becomes a Dark Brother and lives in a literal void. This void, or bottomless pit, becomes like an individual black hole that pulls all that remains of him into the primeval state and the elements that made his vehicles will return to their essence. Then billions of years hence the soul will rebuild the entity on sounder principles.

Now everyone that believes in “the void is wonderful” idea is not a Dark Brother by any means, but I do believe that this is an idea promoted by them to trap the souls of men.

This also goes along in the belief that we can escape cause and effect.

The only way to appear to be free from cause and effect is through the denial of the soul and the creation of an illusionary mental body where soul is not.

This person will seem immune from normal effects to some degree. What he will not realize is that he will experience the most terrible effect of all and that is the destruction or dissolution of all that makes him what he is – all that he has created in a progression over myriads of ages of time.

Belief is the beginning point of a journey and if we start out going the wrong direction and do not turn around with higher realization then we will eventually wind up in the wrong place, and (IMHO) the wrong place is the void.

As I have pointed out before – there are two methods of achieving oneness. The first is allowing an authority figure to replace the God within and then allowing this authority to do your thinking for you. This results in following the authority over God.

The second way to oneness (which is the only real oneness) is to touch the soul together and so the two see through the same eyes of the Spirit. When two or more with soul contact see as one they will appear to some to be following that which is without in blindness whereas they are following that which is within with vision. Only when the onlooker sees this same inner vision can he understand. I assure you that whenever I say anything that does not ring true to soul that I will be called upon it by even my strongest supporters.

Rick has done so recently and even Glenys questions me from time to time. Sometimes those who are in great harmony with me through the oneness principle send their questions through private e-mail such as this one from Glenys:

“I have taken from your previous writings that females have magnetic, receptive energy and somehow got the impression that the leaders who are to appear to prepare mankind for the return of the Christ would need to be men with their sending energy in order to attract more people to the cause. I saw female energy as just as important but playing a role that was more supportive in nature. Therefore, I thought the anointed ones would be men because they would need to be ‘out there’. I somehow thought that female masters would come later when humanity was more ready for them.”

Glenys here was looking at two teachings that I have posted and one seemed to contradict the other. I can tell you this about her and that is that if my explanation does not ring true with her soul that it will not be accepted.

Notice that before she jumps on me for being wrong that she asks for clarification of my teachings. In the end if what I say is in harmony with her soul then all will be well, but if it is not then I will guarantee that she will not blindly follow. She has had enough experience with me so she may give me the benefit of the doubt where soul confirmation is not readily available, but I know she and many others in the group would choose the voice of their souls over any authority I may have.

This situation does not exist in any of the churches I know about. I was excommunicated from the Mormon church only because of my thoughts about the scriptures, not for anything I did.

“It is true that in the Molecular Order that the females have the magnetic-receiving energy and the males are radiant-sending? It is also true that from a higher view the male-female combinations will be viewed as one Adam (atom) or one unit of greater balance.”

The members of the molecules will, especially in the beginning, lead dual lives – one as an individual and another as a member of a group life. The group life will have its goals, but this will not prohibit the individual from acting within his own sphere and initiating in harmony with his or her own soul.

It is possible that some of these nine of prophesy will be male/female units acting as one, but it is also possible that some could be individuals either male or female. The thing to remember is that the greater powers or the soul and spirit are much more accessible when disciples operate within their natural energy. The female’s natural line of force is magnetism but for the male it is action-radiation.

In the beginning of the creation of human molecules there will be some imperfection in the lining up of energies and there will be times when the physical female will assume the male energy and the physical male will assume the female energy. This will produce some stress on the male-female units but it will not always prohibit the creation of a successful molecule. If the twenty-four plus members of a molecule allow the spiritual energies to flow without resistance a link can be established.

Here is another point. The Brotherhood are working through disciples all over the planet and even after the first molecule is created there will be many high disciples around the globe who may not be aware of it or drawn to it. Eventually, all disciples will be molecular on the physical plane, but for some time to come there will be many who are only linked through their work to an unseen molecule of the Brotherhood.

So ladies – do not forego initiating because that is “a man’s job.” There is equal opportunity here. Sometimes male and female will work together, as my wife and I do in many areas, and sometimes you must act as an individual.

Madam Blavatsky was in a female body yet was a much more powerful initiate and leader than was her male associates.

No matter which sex we are, no matter what age or race, there are always more opportunities for leadership and initiation than we can imagine.